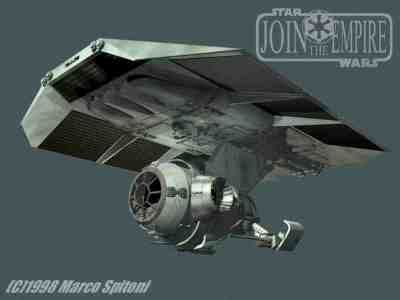 Description: The Tie TL was one of the successors to the Tie Bomber, designed to excel in space warfare, the Tie TL is a small fast fighter with a torpedo launcher capable of handing out significant levels of damage to even capital ships. The Tie TL is recognisably one of the Tie series, with a single solar panel which acts as an aerofoil to keep the fighters manueverability excellent even within an atmosphere. These fighters featured in many propaganda films for the Empire due to their good looks and efficient design, however in reality they have only been built and used in moderate numbers due to their high cost and maintanence needs. But after the Battle of Endor, the Empire resources were reduced, and fighter transports and disposable fighters fell out of fashion with Imperial forces, the Tie TL was already equipped and ready to take advantage of this new doctrine, and began to be used in larger numbers as this shift in Imperial policy caused more fighters with shields and hyperdrives to be brought into service.


Page designed in Notepad, logo`s done on Personal Paint on the Amiga.
Text completely by FreddyB. Image is by Marco Spitoni, copyright resides with him.
Any complaints, writs for copyright abuse, etc should be addressed to the Webmaster FreddyB.