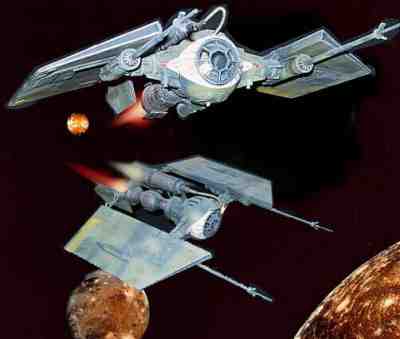 Description: The TieX is a ugly hybrid based mainly on the standard Tie/ln starfighter including some elements of wrecked X-Wing fighters in its design. The cockpit module including sensor package is from the Tie fighter, but the controls have been completely reworked to control the X-Wing engines and laser cannons attached to the fighter. The Cockpiut has actually been turned upside down, allowing the pilot to enter the fighter from beneath since access from above is blocked by control cabling for the engines. The TieX is a very cheap Ugly, making it extremely common in the pirate and criminal communities, although its slow speed, weak hull and poor armament makes it to be considered a universally poor vessel.