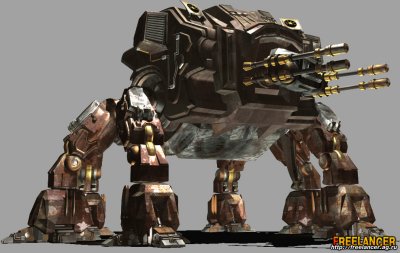 Description: As the New Republic expanded its influence across the galaxy the need for a large and powerful walker became necessary to match the Empire's AT-AT Walkers. Although the New Republic was using captured AT-AT's and fast airspeeders to defeat the Empire, they needed to project an image of power and yet show that they were different to the Empire. The Titan was designed by a consortium of different core world corporations, and has thicker armour, more powerful weapons and a higher top speed than the AT-AT, although costs considerably more. The high cost has meant that the Republic hasn't ordered large enough number of these walkers for them to make a major impact on the galactic civil war, but they are trooped out at ceremonies to show the military might of the Republic when necessary.


Page designed in Notepad, logo`s done on Personal Paint on the Amiga.
Text completely by FreddyB. Image is by Freelancer.ag.ru, copyright remains with them.
Any complaints, writs for copyright abuse, etc should be addressed to the Webmaster FreddyB.