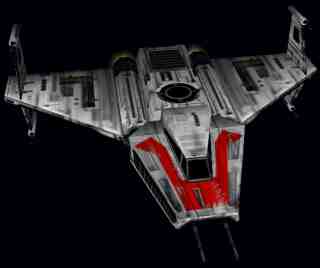 Description: A fighter from the early days of the Empire, built by Koensayr the manufacturers of the highly successful Y Wing fighter. With the Y-Wing such a runaway success, Keonsayr decided to challenge the Z-95 Headhunters grasp on the fighter market with a dedicated fighter which would mimic the Y-Wings success on the Fighter-Bomber market. The design they came up with was the Toscan, which included a number of features in common with the Y-Wing, including the mix of Laser Cannons and Ion Cannons, but where the Y-Wing perfectly suited its role as a bomber, the Toscan seemed not to fit into any particular role well. Its 2 man crew allowed it to perform well in battle, however many purchasers felt that having twice as many crew members in their squadrons was a disadvantage, the Toscan is also fairly slow so although its Ion cannons would make it perfectly suited to disabling fleeing vessels, it wasn't even well suited to this role. However none of this stopped the Toscan fighter from selling well, and although it was never the runaway success of the Y-Wing or Z-95, Toscans are common sights throughout the galaxy.