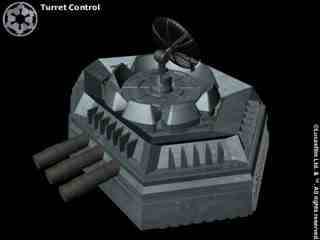 
Description: A Turret Targetting Control Centre is a 15 meter square armoured building which contains advanced targetting systems which can control and co-ordinate the weapons of an entire base or facilty should it be staffed by skilled enough crew. The systems make the weapons more accurate, with aid of targetting computers, sensors and focussing electronics, making this building dangerous although not directly. Because of the indirect nature of the advantage that this building offers Imperial Forces, many Imperial Commanders overlook its deployment when setting up bases. But Rebel Commanders have learnt the advantage that it gives the Empire in bitter deaths, so if it is known that a Turret Targetting Control Centre is present, then Rebel Commandoes will normally be despatched to help balance the scales once more.