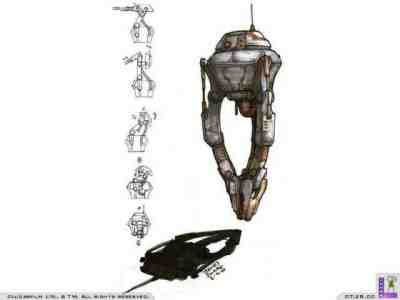 Description: Although sharing many systems with the Arakyd Probe Droid, the 7T3 is designed as a battlefield combat droid rather than an exploration and scouting droid. The droid moves using a repulsor drive similar to the probe droid, however also has a set of legs it can use to move, although much slower (move is reduced to 8). The main weapon of this droid, a powerful laser cannon, is deployed by the droid folding out into its turret configuration (takes one round). In this configuration it can act as an automatically targetting laser cannon, firing at targets under its own volition, or under command from a command post. These droids were designed for the Empire, to allow territory to be held easily without setting up long term defences, letting the Imperial forces be more mobile and to react to changing circumstances as battlefield conditions required. The Empire however prefered to use organic solutions, so only bought these droids in small quantities, prefering to use E-Web heavy repeating blaster crews to secure and hold territory when the need arose. Some corporations have purchased these droids as security droids, however the sheer power of their weaponry makes them less than ideal, as they can do more damage to corporate property than the intruders they hope to stop.


Page designed in Notepad, logo`s done on Personal Paint on the Amiga.
Text completely by FreddyB. Image is by Lucasarts copyright resides with them.
Any complaints, writs for copyright abuse, etc should be addressed to the Webmaster FreddyB.