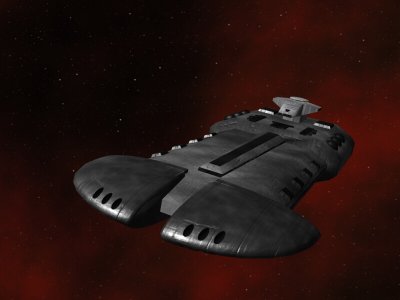 Description: A brand new addition to the Mandalorian fleet, the Vanguard is a scaled down version of the Shadow Class Super Cruiser, and is a fast and heavily armed addition to the fleet. Although the Vanguard doesn't add anything new to the capabilty of the Mandalorian fleet, it is a fast and manueverable capital ship which although in the whole only equivalent to an Imperial Star Destroyer, thanks to its much heavier armaments it can easily match the Imperial vessel. Introduced to replace the aging Armageddon class cruisers, the Vanguard is smaller and carries heavier weaponry as well as more fighters. However the ship has less weapons, and has a weaker hull, leading to many Mandalorians disliking the design when compared to its ancestor, but the addition of a cloaking device and the massive amount of damage this vessel can hand out has silenced a number of its detractors. Cloaked fleets are the way forward for the Mandalorian Empire, and as such older vessels incapable of cloaking are being phased out in favour of the Axe's, Shark's, Shadow's, Inferno's and Vanguard's which can form such a fleet. The Mandalorian fleet however cannot stand to lose the older vessels, so these are simply being reassigned to planetary defence roles where their lack of cloaking technology does not hamper them as much.