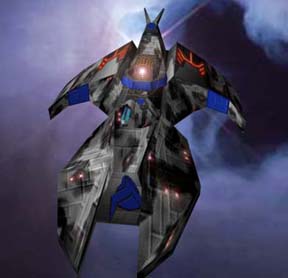 Description: The Vengeance Class Destroyer was originally designed for Imperial use by the Telegorn Corporation, but the design was not adopted by Imperial forces who disliked the vessels lack of starfighter support and weaponry. The design was put onto the general market and sold to Imperial allied worlds for their defence forces, although for such a large vessel it is extremely underarmed. Vengeance Destroyers are common within the core worlds, especially after the fall of the Emperor when the worlds needed to rely on their own defence forces against Rebel attacks, captured vessels however also ended in Rebel fleets and were siezed by Imperial Admirals to bolster their weakened forces. Extra weapons were added in refits, however they were usually forced into action without these upgrades making them easy targets for better equipped Rebel and Imperial vessels.


Page designed in Notepad, logo`s done on Personal Paint on the Amiga.
Text completely by FreddyB. Image is by Unknown, copyright resides with the Artist.
Any complaints, writs for copyright abuse, etc should be addressed to the Webmaster FreddyB.