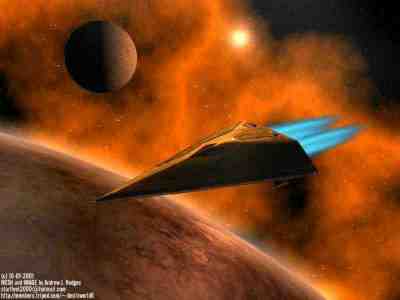 Description: The Viper Patrol Ship is an older design, dating back to before the rise of the Empire, the Viper is designed to patrol systems and to perform early customs checks. Capable of carrying a squad of security troopers and a number of prisoners in addition to its crew, the viper can act as a small troop transport or a shuttle in addition to the duties it was designed for, and a few have had the additional passenger quarters ripped out to free cargo space to make the Viper a small but perfectly servicable transport ship. While the Viper achieved some success when released, that has now waned enough that the line may soon be discontinued, buyers now feel that the single laser is not enough for a patrol ship to stand up against the heavy armaments that most pirates and smugglers have mounted on their vessels. Although a few remain in service with system patrol forces, the majority mave been sold off into the private sector with some ending up in the hands of the very pirates that the ship was designed to combat.


Page designed in Notepad, logo`s done on Personal Paint on the Amiga.
Text completely by FreddyB. Image is of a Viper Pursuit Ship from Elite by David Braben and Ian Bell, copyright resides with them.
Any complaints, writs for copyright abuse, etc should be addressed to the Webmaster FreddyB.