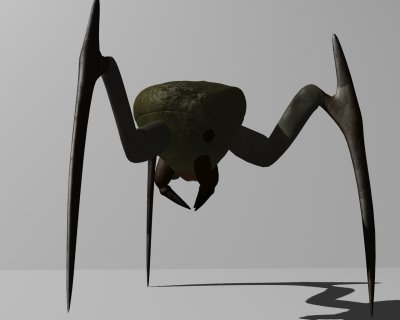 Description: The Vlaadoz is a swampland predator which uses its massive height to wade through marshy terrain, and uses its three clawed limbs below its main body to haul prey into its mouth. The three limbs and mouth are dangerous to smaller creatures such as humans, and the Vlaadoz's speed makes it deadly to those encountering it while on foot. Vlaadoz use their three massive legs to wade through deeper areas of swamp, or to step over obsticles, striding quickly through the difficult terrain they live in. These predators lay clutches of eggs, and leave these eggs to hatch on their own, having no parental instincts and living solitary lives except on the very rare occasions they come together to breed. Male and Female Vlaadoz are nearly identical, and are equally dangerous to those wandering into swamps and becoming possible prey of these large creatures. Vlaadoz are found on a few worlds, their eggs having been accidentally transported with cargo allowing these creatures to take a position near the top of the food chain on almost any world they are introduced to.