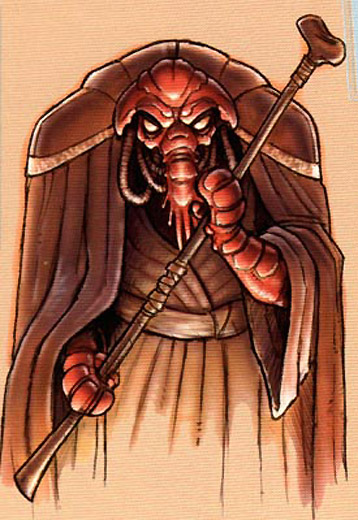 SPECIAL ABILITIES
Natural Armor: Krevaaki possess an exoskeleton which provides a +1 pip bonus to any Strength rolls made to resist damage.

Stoic: The face of a Krevaaki is composed of a series of shifting, chitinous plates with a limited range of expression. During face-to-face communication, it is difficult (if not impossible) for anyone who is not a Krevaaki to read their facial expressions. Krevaaki gain a +2 pip bonus when attempting to make Con, Intimidation, or Persuasion skill rolls against non-Krevaaki.

Tentacles: Krevaaki use their tentacles in the same was as bipeds use their arms and legs. Krevaaki receive a +2 pip bonus on all Climbing/Jumping skill checks that involve climbing, and a further +2 pip bonus to Brawling skill checks made when grappling an opponent. On the flip side, the tips of their tentacles lack the dexterity of a humanoid finger, and Krevaaki suffer a -1D penalty on rolls made to perform intricate work or manipulate small objects.

Story Factors:
Xenophobic: Because Krevaaki are considered a bizarre species by most bipeds, they prefer to conceal their tentacled lower bodies.

These are the known powers Vodo-Siosk Baas possessed and it is believed that he had access to other powers.


Vodo-Siosk Bass was a Krevaaki Jedi Master from Dantooine known as the teacher of future Jedi Knights Dace Diath, Shoaneb Culu, and Nomi Sunrider. Baas was expert at the creation of the lightsaber and could create such a weapon in mere days.

Baas was also the teacher of the Jedi Knight Exar Kun before he turned to the Sith teachings and the Dark Side of The Force. Despite his own proficiency with lightsabers, Baas preferred to use a simple staff which he wielded adeptly against any other lightsaber. He augmented the staff's strength through the Force.

Thousands of years before the Battle of Yavin, Baas was greatly troubled by the rise of Sith power, especially because his former student was at the heart of the disturbance. He felt that he had failed, and returned to Coruscant after the capture of Ulic Qel-Droma. Baas hoped to sway the former Jedi back from the Dark Side, but was foiled by the appearance of Exar Kun. Kun challenged him to a duel, using his new and the first double-bladed lightsaber, and Baas was brutally slain by his former student on the floor of the ancient Senate Chamber.