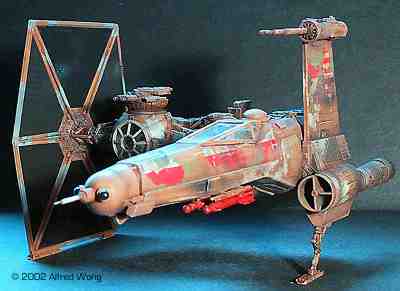 Description: The Vornskyr is an "Ugly" hybrid of an X-Wing fighter and a Tie-ln, and combines the cockpits of both into one fighter. The cockpit of the X-Wing is used to control the vessel using most of the avionics and electronics of the X-Wing fighter, the cockpit of the Tie is strapped to one side and is used by a gunner to control the Tie laser cannons which are mounted to a swivelling mounting on the Tie cockpit roof. Vornskyr's are designed to use parts from the most damaged X-Wings and Tie Fighters, using only one engine from the X-Wing and relying on the sensors of the Tie Fighter replacing those of the X-Wing with a laser cannon mounting. For all their weaknesses and clumsyness Vornskyrs are fairly efficient and reliable fighters, which are reasonably common among pirate groups.