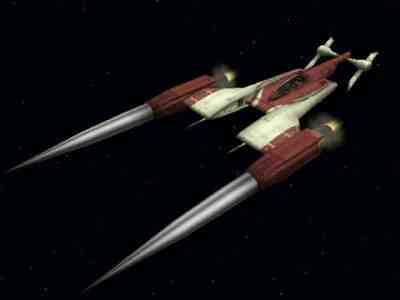 Description: The SoroSuub XN-38 Vortex is an Interceptor dating back to the final days of the Old Republic predating such vessels as the Z-95 Headhunter and the Y-Wing. As such it shows its age somewhat, with weak sensors, weapons, shields and hull, but the advantage of this vessel lay in none of those attributes anyway, the Vortex was, and still is, fast. The massive engines which make the vessel the same length as some light freighters, are as fast as some Tie Fighters, and much faster than most starfighters sold today. This made the ship incredible in its day, and still a fairly worthy vessel now, capable of outrunning most of its opponents and intercepting enemy vessels when they were far away from their targets, the Vortex sold in large numbers becoming almost as popular as the Naboo N-1 Starfighter. Although the Vortex has suffered badly through age, and parts for these fighters are now rare, they remain in service with a number of worlds, where their speed allows them to compete favourably with newer and far more expensive fighters.