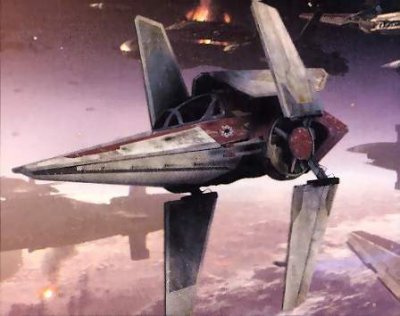 Description: The agile V-wing starfighters served in the Republic Starfleet in large numbers during the Clone Wars and likely continued to serve in the Imperial Starfleet in the years following this massive conflict. They bore a passing resemblence to the TIE fighters of the later Imperial era, with their vertical heat radiator wing-panels making the fighter look like an 'H' when viewed from the front.

V-wings carried a single pilot and a Q7-series astromech droid. Like most of the fighters mass-produced for Republic loyalist forces, V-wings were too small for a hyperdrive, relying instead on carriers like the Venator-Class Star Destroyer. Its armament consisted of twin laser cannons capable of swiveling to engage targets off- axis. The V-wing's twin ion drive thrusters gave it a maximum acceleration of 4,800g.

Three V-wings escorted Emperor Palpatine“s Theta-class Shuttle as he returned to Coruscant from Mustafar at the end of the Clone Wars.


Page designed in Notepad, logo`s done on Personal Paint on the Amiga.
Descriptive Text from Wikipedia. Stats by FreddyB. Image is by LucasFilm, copyright resides with them.
Any complaints, writs for copyright abuse, etc should be addressed to the Webmaster FreddyB.