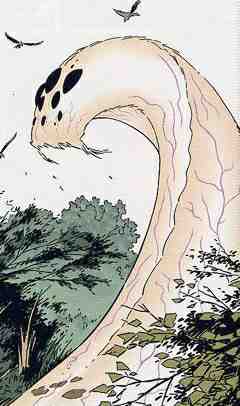 Description: A wandrella is a massive ten- to fifteen-meter long worm native to the planet Mimban. The worm lives in the muddy plains of the jungle planet. It has cream-colored phosphorescent skin streaked with slashes of brown, and a cluster of eyes on its blunt end. The creature is very primitive in its thinking, and charges forward after its prey on its armored belly often attack vehicles and droids is an attampt to get food.


Page designed in Notepad, logo`s done on Personal Paint on the Amiga.
Stats by FreddyB, descriptive text mainly by StarWars.com. Image is Copyright LucasFilm, copyright remains with them.
Any complaints, writs for copyright abuse, etc should be addressed to the Webmaster FreddyB.