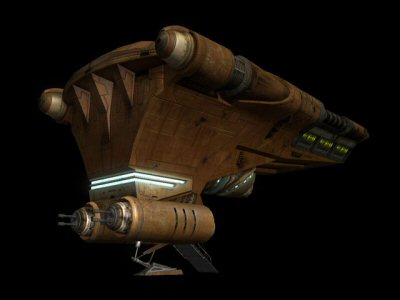 Description: The Kachirho Class Shuttle is one of the few vessels constructed on the world of Kashyyyk, although the Wookiees are a space faring species, their history of enslavement has hindered them entering the galactic community on an equal footing. The Kachirho is a sturdy design, based on captured technologies of the Confederation of Independent Systems during their brief attempt at occupying the system. These vessels were used for civilian and cargo transportation during the Imperial occupancy of the planet, although they were later sold across the galaxy when the planet was liberated. The slightly older technologies used in the vessels design means that they are easy to maintain and upgrade although the slow hyperdrive system has hindered sales of the vessel, leaving its only selling point the fact that it is designed with a larger species in mind making it more comfortable for large species to use than more conventionally sized vessels.


Page designed in Notepad, logo`s done on Personal Paint on the Amiga.
Text completely by FreddyB. Image is from Star Wars: Galaxies: Rage of the Wookiees, copyright resides with Sony Interactive/LucasArts.
Any complaints, writs for copyright abuse, etc should be addressed to the Webmaster FreddyB.