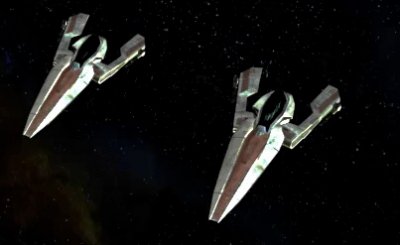 Description: The W-Wing Interceptor was an early design from Kuat Systems Engineering, designed for the dual role of combat interceptor to defend the Republic fleet, and combat vessel to carry the Jedi. Carried by the capital ships of the Republic, such as the Republic Gunship, these fighters acted as an anti-fighter screen around the vulnerable and slow capital ships intercepting attacking fighters and assaulting enemy capital ships. The design was continually revised and modified until it eventually became the basis for the Delta-7 Jedi Starfighter, but the original design served with distinction throughout the Mandalorian Wars and the Sith Wars against the Dark Siders Revan and Malak, landing Jedi on enemy installations and planets as well as nearly equalling the Starforge Sith Starfighters used against the Republic by the Sith. W-Wing's were fast and powerful vessels for their time, and along with the L-Wing Heavy Starfighters they served the Republic for many decades and are still capable of impressive performance even 4000 years after their original introduction.


Page designed in Notepad, logo`s done in Personal Paint on the Amiga.
Text by FreddyB. Image is from Knights of the Old Republic, copyright remains with BioWare / LucasArts.
Any complaints, writs for copyright abuse, etc should be addressed to the Webmaster FreddyB.