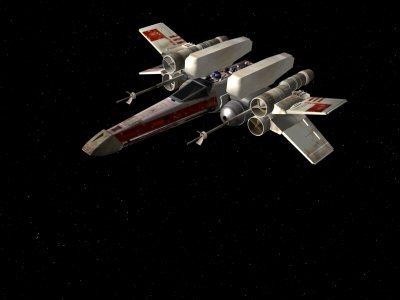 Description: After the defection of the Incom design team to the Rebellion, they began seeking other ways they could make themselves useful, and seeing that the Y-Wing Bomber was showing its age, and the B-Wing was still a long way from completion, they looked into filling the Bomber role for the Rebels. The X Bomber is a modified X-Wing fighter design, making use of many of the same parts, but adding two powerful Proton Bomb launchers, with a far greater range and greater power than the Torpedoes that the X and Y Wings were armed with. The X Bomber was built in small numbers, proving itself as a powerful assault vessel, but the rarity and expense of its Proton Bomb arsenal made it far more cost effective for the Rebel Alliance to keep using Y-Wings, and then to use the B-Wing once it became available. The X Bomber was then consigned to use by a few speciality squadrons, making use of its powerful bombs in cracking open enemy bunkers or vessels.