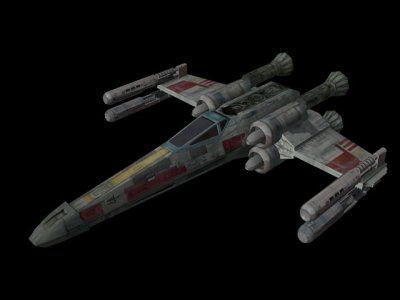 Description: After the X-Wing design team defected to the Rebellion Incom was nationalised and many of its resources were turned over to Sienar for production of TIE Fighters. However Incom had large numbers of designers who weren't on the X-Wing team, and were pretty much left on their own for many months after the nationalisation. Feeling that they might be able to save their company by recreating the lost X-Wing designs, these designers started to recreate all of the work done on the T-65. Since the X-Wing was based on the Z-95 Headhunter the team had a head start on the design process, they also had large supplies of the parts that had gone into the X-Wing as well as records of the fighters testing. With all of this they managed to very faithfully recreate the X-Wing design, with some small differences, the flight control and fire control software was completely different, the engines were replaced by larger units capable of a marginally higher top speed, and the laser cannons were replaced with weaker, but longer ranged blaster cannons, so the fighter was labelled the X-Wing T-66. The all of the available parts went into constructing these fighters, however the Empire came in and killed the designers to the last man, believing that they were preparing to defect as well. The fighters remained in a warehouse for several years, until the New Republic liberated them, finding them powerful but now dated starfighters, the Republic put them up for auction where they were snapped up by collectors and pilots looking for something a little unique.

Page designed in Notepad, logo`s done on Personal Paint on the Amiga.
Text completely by FreddyB. Image is from Star Wars: Galaxies: Jump to Lightspeed, copyright remains with Sony Interactive / LucasArts.
Any complaints, writs for copyright abuse, etc should be addressed to the Webmaster FreddyB.