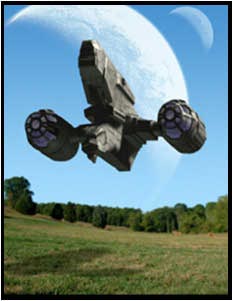 Description: The YC-1200 is a personel shuttle, designed to transport small numbers of passengers from place to place much in the same way as the Lambda class shuttle does for the Empire. The YC-1200 was produced during the final years of the Old Republic, and was bought in large numbers by the Old Republic itself for transporting tax inspectors and other officials between member worlds, chosen for this role because of its good speed and ability to defend itself. YC-1200's are now rarely seen due to their small cargo hold and poor weaponry compared to newer vessels, CEC has ceased production although the vessel shares parts with the YT series of transports so the remaining examples of this vessel are generally well maintained and operational.


Page designed in Notepad, logo`s done on Personal Paint on the Amiga.
Text completely by FreddyB. Image is by Panic Struck Productions from their Fan Film Star Wars Revelations, copyright resides with them.
Any complaints, writs for copyright abuse, etc should be addressed to the Webmaster FreddyB.