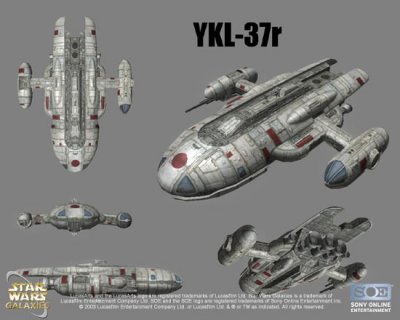 Description: The Nova Courier was a last-gasp foray by Gallofree Yards, Incorporated into the realm of light transports, a market nearly dominated by the vast offerings of the Corellian Engineering Corporation. Sales of Gallofree's primary offering, the medium transport, were disappointing as rumors circulated around the shipping industry of early-adopters having problems with ship reliability. The ship's unprofitable down-time that would have been minimized by the medium transport's modular approach to cargo storage was instead more than cancelled out by higher-than-average maintenance requirements. As a result, the medium transport failed to make a splash in the market and Gallofree's financial prospects became bleak.

Having alienated several of the larger shipping fleets with the failed promise of the medium transport and with other understandably reluctant to invest in their ships, Gallofree felt that manufacturing a light transport would allow them to tap the huge owner/operator market. In addition, with the production of a smaller vessel it was hoped that Gallofree would be able to divest itself of the larger drydock shipyards necessary to build their medium transports. Switching to normal assembly lines would hopefully mean a slimmer and thus cheaper operation, providing the company a large cost savings in the long run. However, the cost of transitioning their entire production model was staggering and their finances became more shaky. The Nova Courier was the ship that was hoped would solve Gallofree's financial problems, but the buzz in the industry was that the company was on borrowed time, and most of the prospective customers were reluctant to buy into a new hull unless there were guarantees that the shipyard that made it would be around for a while. In the end, Gallofree suffered bankruptcy shortly before the Battle of Yavin.

While selling off assets to try to stave off the debt collectors just a bit longer, Gallofree needed clients that weren't as picky as their usual customers. Enter the Rebel Alliance. Constantly moving to stay ahead of their Imperial pursuers and with a network consisting of elements spread far and wide and an almost non- existent static infrastructure, the Rebel Alliance desperately needed transports of all makes and sizes. Gallofree agreed to sell a large number of medium transports to the Rebel Alliance at a cut-rate price. To sweeten the deal, a large number of Nova Couriers were thrown in. Although the Nova Couriers have turned out to be adequate to their task, Alliance technicians generally have a low opinion of Gallofree owing to just how much of a maintenance nightmare the medium transports have been.

The Nova Courier follows the pattern well-established by Corellian Engineering Corporation's - YT' series of transports. Although the larger freighters such as the Medium Transport are built to ply the shipping lanes which are patrolled and relatively free of obstructions, and make their profits on the idea of efficiency of scale, the smaller transports profit off of the special services they offer. They are smaller, more maneuverable vessels equipped for carrying smaller cargos through safe and hazardous space, and they possess a nominal ability to defend themselves. Intended to be crewed by just a handful, almost all systems are made to be accessible and maintainable by a small crew with light tools. In the hands of Rebellion pilots, the Nova Couriers have developed a reputation for being adept at ducking into asteroid belts to avoid pursuers, fighting off individual TIE patrol ships, and generally becoming masters of smuggling weapons, information, and personnel past Imperial blockades.