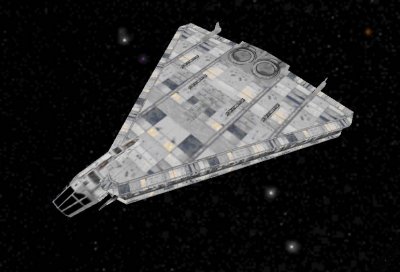 Description: The YT-1600 is a slightly larger CEC transport vessel, providing a fairly room cargo hold in its wedge shaped hull, which makes this vessel ideal for modification or just carrying larger cargoes. Slower than some of the Corellian Transports available, the YT-1600 has a central cockpit offering a good view forwards, as well as a single laser cannon mounted alongside the cockpit for forward firing. Although this arrangement makes little help in defence, and the fact that the weapon is one of the weaker laser cannons on the market, means that most owners replace it with a turret with a little more kick. The YT-1600 has sold well in the decades since it was released, and although due for retirement from production soon, it continues to be a reliable and common sight across the galaxy.


Page designed in Notepad, logo`s done on Personal Paint on the Amiga.
Text completely by FreddyB. Image is by "The Massassi Temple", copyright resides with the artist/designer.
Any complaints, writs for copyright abuse, etc should be addressed to the Webmaster FreddyB.