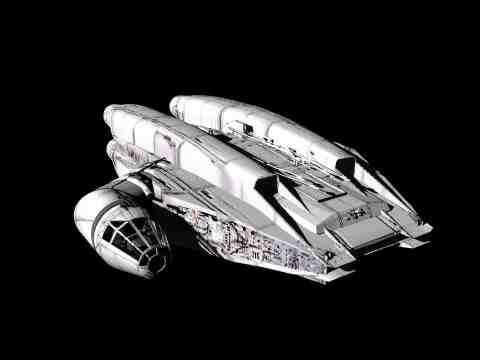 Description: The YT-1900 is a later model from CEC, and is heavily based on the hugely successful YT-1300, with an off-center cockpit, cargo loading arms, and many other features familiar to those who have flown the YT-1300. Slightly bulkier, but with more powerful engines, the YT-1900 can carry larger cargoes, which are loaded through a forward mounted cargo hatch, leaving the lower ramps free for use by crew and passengers. However should the front hatch not be available, or useable, then the lower ramps can still be used as in other older designs. While opinions have been mainly positive about the YT-1900, the only major complaint has been about the turrets placement, since its field of fire is somewhat blocked by the large engine housings that run along the top of the vessel, but as with all turret placements the fire of fire always depends on good interaction between the pilot and gunner. As with previous YT series ships, the turret can be locked into a forwards firing position, and fired by the pilot if he is flying the ship solo. The YT-1900 has sold in good numbers and looks to be as big a success as the other YT freighters.


Page designed in Notepad, logo`s done on Personal Paint on the Amiga.
Text completely by FreddyB. Image is stolen from a Star Wars Fanfilm accessable through TheForce.net, copyright resides with the artist/designer.
Any complaints, writs for copyright abuse, etc should be addressed to the Webmaster FreddyB.