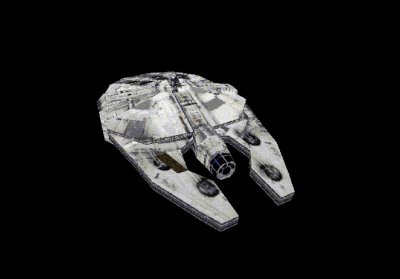 Description: The YT-1950 is a slightly larger Corellian Transport vessel, capable of carrying more cargo than the extremely successful YT-1300, the design is similar to the YT-2000 design which followed it. The ship has a central cockpit offering a better overall field of vision to the side cockpit of the YT-1300, but the cargo mandibles block vision to the sides something that was rectified with the extended neck of the YT-2000. The ship is however a fine example of Corellian engineering, with a large cargo hold and tough armour making it a fine overall transport vessel for the independant frieghter captain. YT-1950's are still sold, although the line is close to retirement, and many thousands of these vessels can be seen across the entire galaxy.