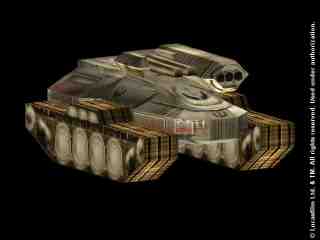 Description: The Yutrane Corporation was another of the military technology companies nationalised by the Empire, who's development and production teams joined the Rebel Alliance. This after changing their designs to take into account the limited resources of the Rebellion, the Yutrane Attack Tank was rushed into production on a few allied fringe worlds, and saw its first use shortly after. Although limited in comparision to Walkers, and even fairly weak compared to Imperial Heavy Repulsor Tanks, the Yutrane Attack Tank was never the less a very effective vehicle, especially when used in conjunction with its Repulsorlift little brother. The Concussion Missile Launcher provides a powerful weapon for protection against speeders, but also has a heavy enough payload to be effective against walkers, and the built in shield generators make the Yutrane strong enough to hold its own in any firefight.