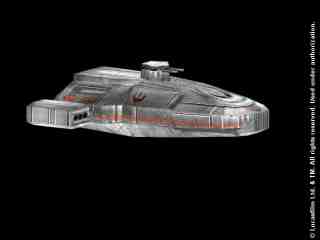 Description: The Yutrane Corporation was another of the military technology companies nationalised by the Empire, who's development and production teams joined the Rebel Alliance. The Yutrane Hover Tank was only half developed at this time, and after a few months it was rushed into production, faster and more manueverable than the Attack Tank, the Hover tank manages only to be slightly weaker on the offence, but keeps the powerful Missile Launcher, so is capable of handing out impressive levels of damage to its opponents. The basic components used in the Yutrane tanks are an advantage for the Rebellions small resource base, but led to the tanks being weaker than their Imperial counterparts meaning that the Rebellion was never capable of taking on the Empire in direct confrontations, but the Rebel Alliance's relative lack of numbers compared to the Empire also accounted for this as well. Since the New Republic became legitimate, they have had the Yutrane developers working on a more advanced version of this tank, but unfortunately work has been slow and it will be a few years before the replacement is ready to use, meaning that the Yutrane Hover Tank will have years of use ahead of it yet.