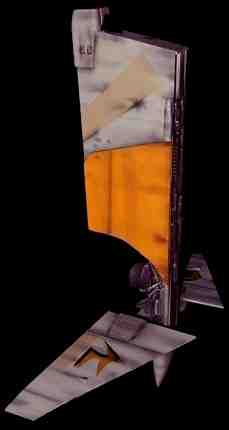 Description: Although the YV-700 is called an "Armed Transport" it was really designed as a custom vessel for Bounty Hunters, and is an adaptation of the YV-666 which was already popular with the Bounty Hunter community. The YV-700's main improvement over its predecessor is the manuvering fins, which had made the YV-666 very manueverable, were improved giving them a full 360 turn radius allowing the thrusters to twist and turn the vessel to an extremely impressive degree, more even than some Starfighters. The engines could twist through 90 degrees, allowing the vessel two flight modes, although it was mainly designed to fly in its upright mode, and to land as a more conventional vessel, this design feature was heavily borrowed from the Firespray class of vessel which was also very popular with Bounty Hunters. The YV-700 has a decent sized cargo bay, which is usually modified into luxurious living quarters, holding tanks, or just used to contain the massive modifications that Bounty Hunters usually make to their vessels, however the vessel isn't too highly priced for a transport ship and many have been purchased and are used in territory where a fast, well armed transport vessel is a near neccessity.