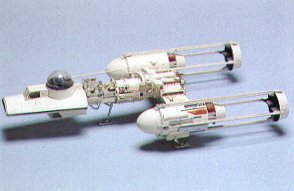 Description: Although most prototype or experimental starfighters never see large scale production, the Y-Wing is an exception to the rule, as its long design process left Koensayr somewhat short of funds, and an experimental design went into small scale production to help fund the final design process. The BTL-X3 is the third and final of the prototypes to be built, and the only one built by Koensayr and sold on the open market, and has a number of differences to the final vessel. The engines are somewhat shorter leaving this model slightly slower than the final design, and the gunners turret rotates quickly throught 360 degrees giving a brilliant field of fire. Under the cockpit is a large projectile launching system, which can fire both Concussion Missiles and Proton Torpedoes, which although giving this model a fantastic punch, does leave it somewhat reliant on ammunition. From this design it is possible to see that Koensayr planned for the Y-Wing to be more of a bomber, with its multiple missile launchers and turret for protection, but is also possible to see that this design would not have been as flexible as the final design which would have reduced sales significantly. BTL-X3's are still seen in limited numbers, but as an even more dated vessel than the standard Y-Wing, they are becoming increasingly rare and infrequently seen.