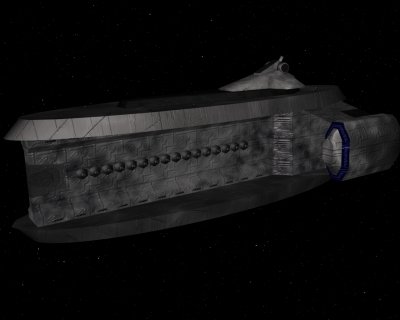 Description: The Typhoon Class Battle Ship from Zenid Defence is a design from the Old Republic, designed and built in the years before stabilty reigned across the Republic, these vessels were sold to anyone who could afford a vessel of this power for their defence. Although slow, the powerful weaponry, arranged in fields of fire to the ships sides as was common during this era, gives the vessel overwhelming advantage in conflicts of its time. The Concussion Missiles especially gave the vessel the ability to hammer opponents, and although limited by ammunition to a far greater degree than newer designs, the Typhoon was perhaps the most decisive combat vessel of its time. The main disadvantage of the Typhoon class, is its total inability to fight Starfighters, and its poor sensor range. Few of these vessels survive, but their size and tough armour make them prime candidates for refitting into front line combat vessels once more.