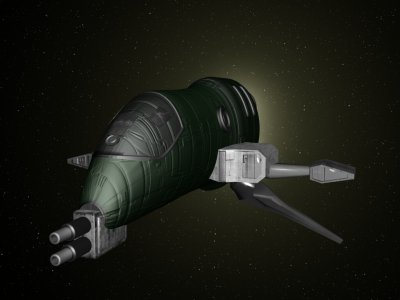 * : The lack of a viewport on the Zen Fighter is disorienting to new pilots, so until they have had sufficient settling in time to the design they suffer a -2D penalty to their Starfighter piloting skill.


Description: Although starfighters have been built for centuries, they have recently only become popular, this was because of the improvement of Head Up Display and control systems which allow the pilot to keep track of numerous targets, enemies and threats in a fast moving combat situation. Before these systems were fully integrated into Starfighter design it was difficult to survive in combat for long, however many different control variants were invented before the modern systems were put in place including the system built into the Zen Starfighter. The Zen "Sensor" Starfighter uses an integrated sensor system which the pilot uses to fly the ship on instruments only, this can be disorienting to the pilot, but when they have settled in many report that it is less distracting without the blasts of laser cannons flying everywhere allowing them to concentrate on the tasks at hand. This system however never became popular, especially considering that the Naboo and Y-Wing fighters were introduced shortly after its release. Slow and well armoured, the Zen fighter sold only in small numbers although has now found some popularity being refitted into an automated fighter controlled by a droid brain. In this variant the fighter is cheap and numerous enough to be a threat to even modern and better equipped vessels.