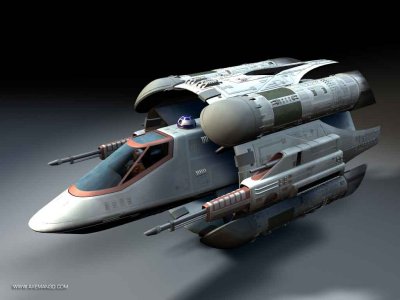 Description: The Zero-Wing Heavy Assault Starfighter was designed by Koensayr the manufacturers of the famous Y-Wing Starfighter to fulfil mucht he same role as its ancestor. With heavy composite polymer armours, and four powerful sublight engines, the ZeroWing is fast and tough, however many considered its weapon load to be somewhat light. The Twin Heavy Blaster Cannons have an outstanding range, but even though they are fire-linked they offer no improvement in their damage causing capacity over the laser cannons on the Y-Wing, also the Ion Cannons are weaker than the Y-Wings leading to them rarely being used. Despite these disadvantages, the ZeroWing is a solid design which continues to sell well despite great competition.


Page designed in Notepad, logo`s done on Personal Paint on the Amiga.
Text completely by FreddyB. Image is by "AxeMan3D.com", copyright resides with him.
Any complaints, writs for copyright abuse, etc should be addressed to the Webmaster FreddyB.