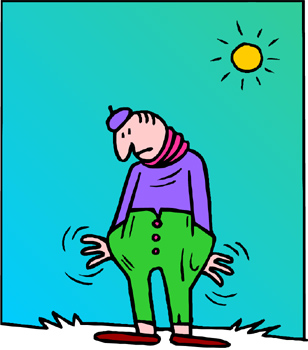 I don't know about anywhere else, but there's a saying here in Scotland "age doesn't come itself", and recently I realised that one of the things its brought with it for me, is more junk to carry around in my pockets.
When I was young, I'd carry a handkerchief in my pocket and that was about it, but the years have added more any more, some of it is vital, some of it is just the responsibilities of age, others are just carried out of habit.
So nowadays when I leave the house I'm pretty much laden down with things, as well as my handkerchief, in the same pocket I carry a pen (always useful to carry a pen) a comb (I hate my hair getting wet and the water running down into my eyes) and my Mobile Phone, in my other pocket I carry my money, my keys (which make quite a collection in themselves as not only do I have a front and back door key for my house, but also one for my shed, my mums house, the DVD cabinet in my living room (I carry a spare as the last key got lost and I had to break the lock open so we could watch any DVD's), plus keys for lockers at a place I worked 20 years ago (they're only keys, I can't be bother to take them off my keyring), I've also got a second key ring with the 8 keys I need to gain access to the buildings at my workplace).
In my back pocket I normally carry my train pass card (I forgot it today so had to buy a ticket), and in the money pocket (if I'm wearing jeans) or other pocket I carry my memory stick and an LED torch (a useful and rather cool tiny little torch which is incredibly powerful) as well as my car key.
And that's just the pockets on my person, in my jacket I carry my wallet, my iPod, a spare pair of glasses (I worry that if I break mine when I'm away from home, I won't be able to drive, especially worrysome when I'm working on the Scottish islands), and medication for my two medical conditions (I get migraines, so have powerful painkillers so I can remain operational if I get one (as long as I take it during the aura phase), and pills for my digestion as I've got Gilberts Syndrome, which manifests in me mainly as an extremely sensitive stomach).
And again, that's not all, that's just the stuff I carry on purpose, my jacket pockets are stuffed full of things that I've picked up, intend to put somewhere, but have just ended up carrying around for ages, things like the program for the music festival I went to with my wife 2 years ago, a pebble I picked up on the beach during a moonlit walk along the beach with my wife, etc, etc.

Anyway, how does this relate to gaming, well it occurred to me, that in most games, looting the corpses of your fallen foes is a common occurance, and its sad how poorly equipped most NPC's seem to be.
Let's take a standard Imperial Stormtrooper, he's got his armour, his blaster rifle, and maybe a couple of grenades and that's it. Now while he's a soldier, so couldn't be expected to be carrying a lot of personal stuff, look at the load a normal soldier carries around with him these days. A quick google showed me this as being a standard US Marine Assault Load (not sure how up to date this is, but it serves its purpose)

Now, some of that is obviously covered by the Stormtroopers Armour with vision enhancement, respirator, commlink, etc all included, but some of the little goodies are what makes it interesting, a Stormtroopers armour comes with the bat-belt with all those little pouches. In A New Hope, we see that at least one of them contains a grapple hook and line which can be fired from the Stormtroopers Rifle (which doesn't get mentioned in their description anywhere I've seen), it seems sensible to say that they probably carry water purification tablets, and energy candy to keep them operational. A medical kit, or maybe just a cut down version with painkillers, drugs to keep themselves conscious, etc might be carried in there.
Although Stormtroopers carry energy weapons (and hell wouldn't some kind of weapon reload or recharge be sensible, a Marine carries 7 magazines, even assuming that they're only 20 round magazines rather than the 30 round ones which are available, thats still 140 rounds of ammunition compared to the 100 shots a Stormtrooper has), wouldn't a fall back weapon also be sensible, some kind of vibro knife seems in order, maybe since they also seem to do police duties, they could also carry a stun baton and obviously they carry the binders that they use on Chewbacca in A New Hope.

I'm not trying to make any solid decisions here, just suggesting that if we look at our NPC's a little more, then not only will it be a little more interesting for our players to search them, but also it could provide both the NPC's and players with a large amount of new options as an adventure progresses.

Page designed in Notepad, Logo`s done in Personal Paint on the Commodore Amiga
All text is an idle meander through Freddy's mind when he was walking down to the train station one morning, HTML and logos done by FreddyB
Images stolen from an unknown website at some remote time in the past.
Any complaints, writs for copyright abuse, etc should be addressed to the Webmaster FreddyB.