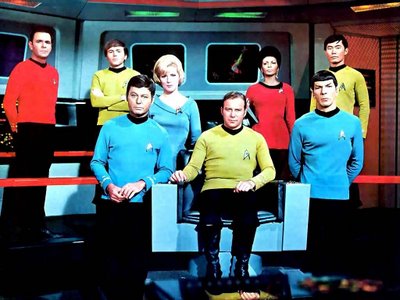 As a big SF fan, I tend to watch most of the big SF movies that come out, and as I get older, I'm getting harder and harder to satisfy. Probably because I weigh this years movies against almost 50 years of great SF, from The Day the Earth Stood Still and Forbidden Planet, through the Star Wars movies, Alien, The Thing, right up to the Terminator movies and Children of Men (this list just from memory and isn't a comprehensive list of my favourites). Anyway, I thought I'd take a little opportunity to talk about two recent movies that basically I felt like having a good old rant about.

First off, Star Trek (2009), (I'm not sure how else to name it apart from the date which continually gets attached to the name). Okay, I didn't hate it, but did feel it was a huge let down, but lets start at the beginning.
As the hype built for the film, I was somewhat scared of how it might turn out, but the news all sounded good, Zachary Quinto as Spock, yeah I can see that. Simon Pegg as Scotty, errrr.... okay I can't see that, but I've loved Simon Pegg's work ever since Spaced, so yay! Winona Ryder is going to be in it, woo-hoo, cool. Everything sounded great, I've really gotten into Lost the past couple of years (my wife has loved it from the start, but I didn't start watching until season 3'ish), so JJ Abram's directing sounded pretty darn excellent to me. Chris Pine as Kirk, I didn't really see, but with everything else in place I was looking forwards to the film.
As the movie approached, the Sci-Fi channel in the UK started running two episodes of the classic series every day, and to hype myself even further, I watched many of them. And was amazing surprised, the writing is excellent in many places, the special effects are fantastic for their age, the dialog is well done much of the time, and although a "fan" of Star Trek, the original episodes won a new respect from me as not just good classic television, but actually just Good television.
Then I watched the movie, which isn't terrible, but I sat through it, getting more and more disappointed. They've ret-conned the history, not just to add surprise back into the series (since its a divergent time-line, anyone can die, so in sequel movies you could see McCoy get wasted since the future seen on television no longer exists), but also supposedly to make it more accessible to non-trekkies.
But, errr, they blow up Vulcan and kill Spock's mum. Errr, if I'm a non-trekkie, then how do I know that this is important. How is this more important than if they blew up planet Zib, and killed Scotty's Uncle Jock? You're supposed to know it's momentous, but without having seen previous episodes and without prior knowledge, how are you supposed to know that?
Also, I find myself wondering what happened to Kirk's brother? In the series he had an older brother (who was portrayed by William Shatner with a fake mustache), but in this movie, Sam Kirk seems to not exist (try to avoid nitpickers by changing history, we still find a way of complaining). Also! Am I wrong in thinking that the creation of this divergent time-line also wipes Picard and Star Trek: TNG from existance?
Anyway, all in all, as I've already said, I was disappointed. Mainly because I'd watched the original series only days before and found the new film lacking. It missed out on the spirit of the series in so many ways, and I found myself wondering why the hell they didn't just make a feature length episode of the series with the new cast. Have the Enterprise (as they portrayed it in this movie) manned by these actors playing the original crew, but not have an "origin" story as they've tried here, and not have a massive event (the galaxy at risk from a Romulan captain from the future), just some danger to the crew. No character progression, no massive plots which build over movies, just a good old fashioned story and action romp. . . but I suppose I'm in the minority, since the movie has been fantastically successful.

The other movie I'd like to rant about is Terminator: Salvation. And it's another film I didn't hate, but was very, very disappointed with, and this rant is going to be far shorter.
The original Terminator movies (1+2) showed the future, Skynet had caused a nuclear war, the cities were rubble, and the ground covered with Skulls. The resistance cowered in tunnels, using Dogs to detect infiltration terminators, while they fought against the flying Hunter Killers, and whatever the tank-bot's were called. The future looked bleak, the future looked totally wrecked.
Now, Terminator: Salvation isn't set quite that far forwards, the infiltrator Terminators are just being developed, the war hasn't turned to total extermination of humans yet, with the majority of people still being kept in camps by Skynet. But, errr, things look a little too nice for my liking. Human forces have an organised air force! Which presumably launch from air bases somewhere! Air bases which would be vulnerable to attack from HK's?
Basically, the world has changed from totally bleak, to a bit Mad Max, hell there's even a car chase with Bike form terminators. It's just a little odd.
But anyway, my main complaint with the movie is my own perversity. In the movie, it shows the first meeting between John Connor and Kyle Reese. Now, as anyone who has watched the first movie knows, Kyle Reese is John Connor's friend, who he sends back in time to protect his mother, who the Terminators are trying to eliminate to remove John Connor before he is born. John Connor has explained the importance of his mother to Kyle Reese, who develops a bit of a crush on her, seeing her as the ideal woman. So much so, that when he's sent back in time to protect her, they end up getting together, and it turns out the Kyle Reese is John Connors dad.
What's wrong with that you may ask, they're showing John meeting Kyle for the first time, John knows that Kyle's his dad, so knows that eventually he'll send him back through time to protect his mum. However does this make John think Kyle is indestructable? After all he's going to survive to become his dad!, or does John have to be incredibly protective of Kyle? or else Kyle might die, and John will be wiped from history.
But in my mind, that's not the worst of it. After all, not only does Kyle have to survive to travel back through time, but he's also got to fancy John's mum. So I kept waiting for the moment when John would wander over to Kyle, show him a picture of his mum and say "Hey, this is my mum, she was a bit of alright wasn't she?, wouldn't you just love to give her one? Phoar!". An uncomfortable situation made worse by the fact that in the movie, John looks to be late 30's, and Kyle looks to be a teenager. In my mind, John Connor made the jump from heroic resistance fighter, to rather creepy dude, grooming a teenager for his mum to have her wicked way with. But that's probably just me.
So, enough of this mindless ranting, I've probably scared enough of you away already, so . . . catch you all later.

Page designed in Notepad, Logo`s done in Personal Paint on the Commodore Amiga
All text, HTML and logos done by FreddyB, who's feeling a little deranged and fearful that this rant will be the evidence finally used to lock him away.
Images stolen from an unknown website at some remote time in the past.
Any complaints, writs for copyright abuse, etc should be addressed to the Webmaster FreddyB.