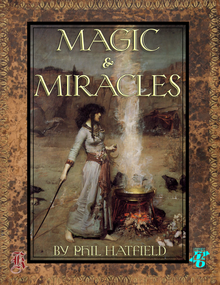 Hello, This is a review for "Magic and Miracles" by Phil Hatfield for the D6 System, published by Keck Publishing
(Disclaimer - I received a review copy)


Magic and Miracles presents 3 ready to go out of the box magic systems for the D6 System, which appear that they should indeed be plug and play ready for any of your D6 games (provided you use hit points, they don't look as compatible with wounds, for instance a level 1 arcane spell does 1d damage . . . that won't hurt anything using the basic Star Wars wound system).

The Arcane and Divine Systems seem (niftily or eerily) similar to ADnD, as spells including a floating disk, goodberry and others appear, as well as a fan spell that seems like burning hands. My only comment - why no color spray? Thats my favorite low level DnD spell!

I am dissapointed that the arcane spells only go up to level 5, particularly when the magical steed references 15D or greater. Though with 10x current dice to raise magic a pip, that would take a while to get to.

Overall the Arcane is definitely my favorite. It also definitely handles the problem of D6 Magic 'You can't hand out Spell of Foom, player can always just make Foom' satisfactorily, and I've always liked mages memorizing spells. I am saddened by the limit on spells memorized though and each spell taking the same amount of time to memorize. I would think as mages leveled they could memorize more spells (maybe a skill off Int instead of raw int determines spell slots) and also, it would seem level 1 spells should be less memorization and such consuming than level 5 ones. There less complex right?

Divine I am less enthused with, as the description in the first part of the book does not match the mechanics. It says "There is thankfully no limit to how many times a faithful follower may pray. The only limit is the personâ€™s Faith Power and whether their prayer is heard and granted by the higher power."
This does not at all seem related to 'You get Wis pips spells/day' Also, it says "They may pray multiple times a day. Only prayers of the same type, done in repetition in a short amount of time, become more difficult to be granted."
There is no mechanic for 'you need to vary your spells up' either.

I really would like to see mechanics for 'as many tries as you want, but vary them up lest you annoy the gods', not 'yeah, ration the spells, X/day'

As a minor note . . . I'd also like to see a list of the divine spells arranged by casting difficulty, since would be convenient for clerics trying to pick what to cast to be able to look at spells in their weight class specifically

The Conjuring system does not at all seem related to ADnD (good or bad as you like), but is very odd in that it spends a lot of time detailing explicit game mechanics for what would seem to be background fluff (or maybe I am weird, and lots of games do involve spending a few years as their caster learns to actually be a caster). I am a little perplexed by the mechanics of learning new tricks also, but I am sure that is something which could be easily cleared up or I'm just blind.

Conjurer's also seem even more rationed than other types of casters, as they regain only 3 MP per day it seems, and there spells can wind up requiring a lot of MP. Also, the spells themselves suggest that they can be varied, but how this varying occurs is less explicitly stated.

Overall though this is a cool product. It provides 3 new magic systems to toss into your D6 games, 2 of which are definitely good to go as written (the third I think may need some clarifying erratas) and can definitely allow you to mimicish ADnD in D6. I would suggest tweaking damages some if your using a wound system instead of a HP system. I fully intend to allow my players to tell my players about this, and I think that with the convenience of 'memorize X spells and off you go' the Arcane system may well be a hit for players who heartily dislike the build your own aspect of D6. I will also at least try a character or two that uses it myself and see how it goes. I don't think I will like it more than the stock D6 Magic (which I consider a spell system in awesomeness second only to Earthdawn) but its worth trying out.

And actually creating and publishing magic systems is a wholly neat thing, having had a variety of failures between disastrous and unspectacular with my own dozen or so efforts on the topic.

I can't imagine offhand using this as the only magic system in a D6 game, but I think it is worthy of its place in the spectrum of D6 Magic Systems, so even if none of my players wind up using it I will have another set of choices for arming opponents for them to face, and that alone makes writing this review worth it

A review by Alex Panzerkit.

Any complaints, writs for copyright abuse, etc should be addressed to the Webmaster FreddyB.