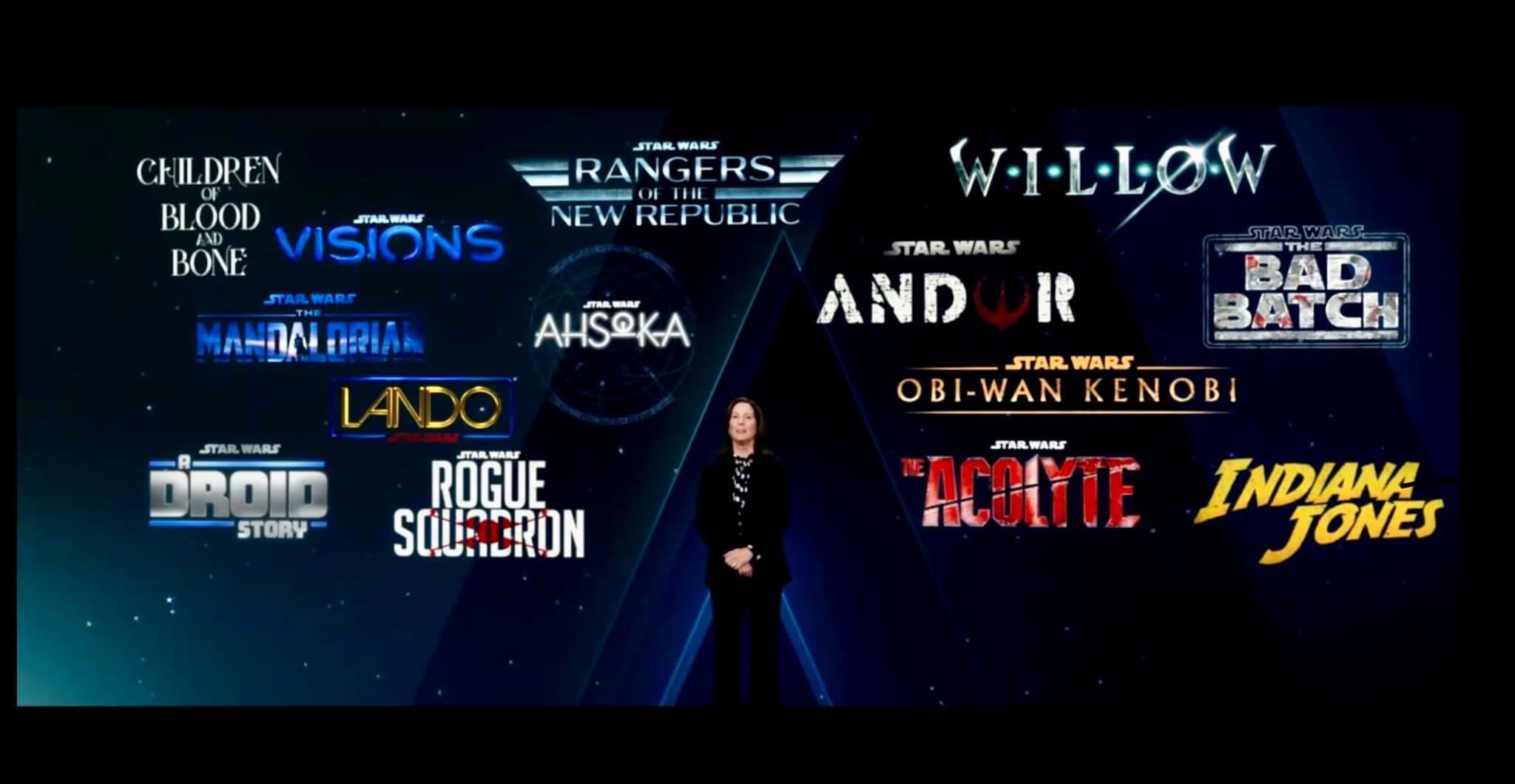 ¬†¬†¬†¬†¬†¬†¬†¬†So first of all, they annouced a Rogue Squadron movie, to be directed by Patty Jenkings, the director of the Wonder Woman movies.

The next Star Wars feature film will be Rogue Squadron ‚ÄĒ directed by Patty Jenkins (Wonder Woman franchise). The story will introduce a new generation of starfighter pilots as they earn their wings and risk their lives in a boundary-pushing, high-speed thrill-ride, and move the saga into the future era of the galaxy.

‚ÄúIt‚Äôs been a lifelong dream as a filmmaker to one day make a great fighter pilot film,‚ÄĚ said Jenkins. ‚ÄúAs the daughter of a great fighter pilot myself, some of the best memories of my life are of seeing my father‚Äôs squadron take off in their F4s every morning, and hearing and feeling the awe-inspiring power and grace. When he passed away in service to this country it ignited a burning desire to one day channel all of those emotions into one great film. When the perfect story arrived in combination with another true love of mine, the incomparable world of Star Wars, I knew I‚Äôd finally found my next film. I‚Äôm extremely honored and excited to take it on, and grateful to Lucasfilm, Disney, and the fans for extending that thrill to me.‚ÄĚ

‚ÄúPatty has established herself as one of the top directors working in the film industry today,‚ÄĚ said Lucasfilm president Kathleen Kennedy. ‚ÄúShe‚Äôs a visionary who knows how to strike the balance between action and heart, and I can‚Äôt wait to see what she does in the Star Wars galaxy.‚ÄĚ

¬†¬†¬†¬†¬†¬†¬†¬†So that seems pretty darn cool, I've always loved some Starfighter action, in fact it's my favourite part of the movies, so focusing on some new members of Rogue Squadron seems like it could be a whole lot of fun. Although it seems we've not been told what time period this will be set in, whether during the Galactic Civil War (as it's the most recognisable period to movie viewers), or after Endor (which was when the Rogue Squadron novels were set).

¬†¬†¬†¬†¬†¬†¬†¬†Next up we've got the Taiki Waititi movie, which there's not a lot of information yet, so it's probably still at a very early stage.

A brand-new Star Wars feature with acclaimed filmmaker and Academy Award-winner Taika Waititi is in development. ‚ÄúTaika‚Äôs approach to Star Wars will be fresh, unexpected, and‚Ä¶unique,‚ÄĚ said Kennedy. ‚ÄúHis enormous talent and sense of humor will ensure that audiences are in for an unforgettable ride.‚ÄĚ


¬†¬†¬†¬†¬†¬†¬†¬†And next we've got the now named Obi-Wan Kenobi, which is nice to get a name, although it's not the simple "Kenobi" I think we all expected. We'd all known about this movie, especially as it begins filming next month in Boston (England not Massachusetts), but the big news was that Hayden Christenensen will be returning as Darth Vader, which is a pretty interesting development.

Last August at D23 Expo, Lucasfilm announced the return of Ewan McGregor in the iconic role of Jedi Master Obi-Wan Kenobi for a special event series on Disney+. Officially titled Obi-Wan Kenobi, the series begins 10 years after the dramatic events of Star Wars: Revenge of the Sith where he faced his greatest defeat, the downfall and corruption of his best friend and Jedi apprentice, Anakin Skywalker turned evil Sith Lord Darth Vader. The series is directed by Deborah Chow, who helmed memorable episodes of The Mandalorian Season 1.

This will truly be a day long remembered, as it was confirmed that Hayden Christensen will be returning as Darth Vader. ‚ÄúThis will be the rematch of the century,‚ÄĚ Kennedy said.

‚ÄúIt was such an incredible journey playing Anakin Skywalker,‚ÄĚ said Christensen. ‚ÄúOf course, Anakin and Obi-Wan weren‚Äôt on the greatest of terms when we last saw them‚Ä¶ It will be interesting to see what an amazing director like Deborah Chow has in store for us all. I‚Äôm excited to work with Ewan again. It feels good to be back.‚ÄĚ


¬†¬†¬†¬†¬†¬†¬†¬†Now, Christensen returning as Vader is interesting, as he didn't for Rogue One, and isn't really needed for Vader to appear, as it can be anyone in the suit, and the voice should be done by James Earl Jones, of whom there's no mention. So I'd guess the Vader we're going to see will be a vision to Kenobi, and will be a more scarred and horrific version than we're used to.

¬†¬†¬†¬†¬†¬†¬†¬†Still with more announcements, we've got an spin off from The Mandalorian with Ahsoka starring Rosario Dawson. Now given my lack-luster appreciation for her appearance in the Mandalorian, I'm not too excited by this, but hopefully they'll fix the few teething problems that I thought they had bringing her to live action.

After making her long awaited live-action debut in The Mandalorian, Ahsoka Tano‚Äôs story, written by Dave Filoni, will continue in a limited series starring Rosario Dawson and executive produced by Dave Filoni and Jon Favreau.


¬†¬†¬†¬†¬†¬†¬†¬†And possibly another spin off from The Mandalorian, few details in this, but I think this is what they've been setting up with Cara Dune this season.

Rangers of the New Republic

Set within the timeline of The Mandalorian, this new live-action series from executive producers Jon Favreau and Dave Filoni will intersect with future stories and culminate into a climactic story event.


¬†¬†¬†¬†¬†¬†¬†¬†Now this I didn't expect at all, a Lando spin off series. I'm guessing this will be the Donald Glover version of the Character (although theoretically could be Billy Dee Williams post Rise of Skywalker), so I think we're going to get Lando being all roguish during the pre Galactic Civil War period, which needs some fleshing out, so sounds good to me.

Everyone‚Äôs favorite scoundrel Lando Calrissian will return in a brand-new event series for Disney+. Justin Simien, creator of the critically-acclaimed Dear White People and a huge Star Wars fan, is developing the story.


¬†¬†¬†¬†¬†¬†¬†¬†Also we got told about the Cassian Andor series, which we've been expecting for a while now. There's an interesting "sizzle reel" video been released as well, which shows a Venator-class Star Destroyer being scrapped, and apparently Andor piloting a Eta-2 Actis interceptor, which seems pretty interesting.

Andor, a tense nail-biting spy thriller created by Tony Gilroy, is set to arrive on Disney+ in 2022. Diego Luna, reprising the role of rebel spy Cassian Andor from Rogue One, will be joined by a fantastic new cast that includes Stellan Skarsgard, Adria Arjona, Fiona Shaw, Denise Gough, Kyle Soller, and Genevieve O‚ÄôReilly as Mon Mothma. Production kicked off three weeks ago in London.

¬†¬†¬†¬†¬†¬†¬†¬†Still not finished, we get the kind of mysterious announcement of The Acolyte. Not much information here, except that it's a High Republic series, so will be pretty interesting to see how it takes off.

Leslye Headland, Emmy Award-nominated creator of the mind-bending series Russian Doll, brings a new Star Wars series to Disney+ with The Acolyte. The Acolyte is a mystery-thriller that will take the audience into a galaxy of shadowy secrets and emerging dark side powers in the final days of the High Republic era.

The series follows the elite and experimental clones of the Bad Batch (first introduced in The Clone Wars) as they find their way in a rapidly changing galaxy in the immediate aftermath of the Clone War. Members of Bad Batch ‚ÄĒ a unique squad of clones who vary genetically from their brothers in the Clone Army ‚ÄĒ each possess a singular exceptional skill which makes them extraordinarily effective soldiers and a formidable crew. In the post-Clone War era, they will take on daring mercenary missions as they struggle to stay afloat and find new purpose.

The animated series will arrive exclusively on Disney+.

¬†¬†¬†¬†¬†¬†¬†¬†Now I'd really hoped for a release date, as we're already past the time of year that Star Wars animated shows usually launch, but we get to see a little more about the series in the sizzle reel. I'm interested in this one, although I really don't rate the Bad Batch, as they seem like the Star Wars version of the X-Men, as their powers seem more like superheroes than Star Wars to me.


¬†¬†¬†¬†¬†¬†¬†¬†A series of short films by leading Anime studios, so a different view of what Star Wars is, which could be really interesting.

Presenting all-new, creative takes on the galaxy far, far away, Star Wars: Visions will be a series of animated short films celebrating Star Wars through the lens of the world‚Äôs best anime creators. The anthology collection will bring 10 fantastic visions from several of the leading Japanese anime studios, offering a fresh and diverse cultural perspective to Star Wars.

¬†¬†¬†¬†¬†¬†¬†¬†And finally, something which to me sounds as if they're reviving the Droids Animated Series from the 80's. So probably a show for younger kids, as a "new hero" meets C-3PO and R2-D2. Fingers crossed it's the young adventures of Ben Solo, as that could be really interesting, showing Ben Solo before he falls, in the same way that Clone Wars showed us Anakin before he fell, creating a more fleshed out and real version of the character. But I think they're walking away from the Sequel era, so it's unlikely we'll see that.

As Lucasfilm continues to develop new stories, the intersection of animation and visual effects offers new opportunities to explore. Lucasfilm Animation will be teaming up with Lucasfilm‚Äôs visual effects team, Industrial Light & Magic, to develop a special Star Wars adventure for Disney+, A Droid Story. This epic journey will introduce us to a new hero, guided by legendary duo R2-D2 and C-3PO.

¬†¬†¬†¬†¬†¬†¬†¬†And that's it, far more than I expected. I didn't expect a High Republic series. I really didn't expect a Lando series, and while I expected 1 spin off series from The Mandalorian, I personally thought it would be a Bo-Katan series (although perhaps The Mandalorian is primed to become more about all of the Mandalorians as it goes forwards), I did not expect 2 spin offs in that era. And the Anime short movies have the potential to be the most interesting addition to the series, bringing to mind what they did with the Animatrix, which was to me the best part of the Matrix movies, with some amazing and interesting short films, with real styles of their own.
¬†¬†¬†¬†¬†¬†¬†¬†But as always, we shall see how these things work out, but it looks like a great time to be a Star Wars fan, with loads of differing content, so if you don't like one thing, then a very different one will be along soon for you to try out, and that can only be positive for the franchise.

All Press Release Quotes, images and videos copyright LucasFilm, Text by FreddyB.
Any complaints, writs for copyright abuse, etc should be addressed to the Webmaster FreddyB.