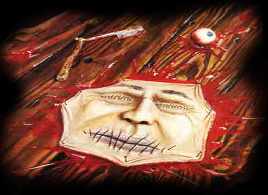 As I mentioned in my daily updates recently, I managed to get hold of a copy of Blood: The Role-playing Game of Modern Horror, which I was extremely glad of, since I'd been searching for a copy for years. Our group had played Blood when it first came out in 1990, and apart from the J's disastrous attempt at writing his own adventure, was one of the most fun games we have ever played. Well, having gotten my own copy, I've decided to do a review (of sorts), and to try to increase the online presence of this game a little.

Blood is a small print British game originally released in 1990 by Underground Games, written by Norley Tucker and Stephen Osborn, and is based around modern horror, such as the novels of Stephen King and James Herbert, but more mainly around movies such as Friday the Thirteenth, Night of the Living Dead, A Nightmare on Elm Street and Hellraiser. As you can see from this list, Blood doesn't attempt cerebral horror at all, it's aiming squarely at the splatter genre here, blood, gore and guts are what it's trying to cover, and it succeeds.

The game is a single book, costing 10 UKP, and is 112 pages long, the cover artwork is the gory image show above, suiting the game perfectly. Internal artwork (by Paul Campion) is of a reasonable to high quality, with images on most pages, these likewise suit the tone of the game, and sometimes manage to be disturbing to even the more mature audience that the game is aimed at. The text, while occasionally brief, serves its purpose well, and manages to include some of the black humour that the genre demands, with laugh out loud moments included which make the book a short, but extremely enjoyable read.

The game system is heavily table based, which makes the game show its age, but these add to the tone of the game so can be easily forgiven. The game mechanics are cleverly done, with a system that makes critical failures rarer as your skill increases, and critical successes more likely, something that newer games (and I'm thinking D&D3e here) could well take a lesson from. Damage is handled by using Hit Points and Blood Points, with certain types of wounds bleeding more than others, and continuing to bleed until they are treated or bandaged.

A now expected part of any horror system is "Sanity" loss for seeing the horrific things that the heroes always see, Blood handles this through Will Power Points, and also has the obligatory insanities that all horror RPG's must have. However as befitting its more adult audience and its slasher movie basis, Blood has a list of insanities based on movies rather than textbooks, leaving those affected far more likely to start dressing up in mommies clothes and wielding a pickaxe than suffering from claustrophobia.

Stats-wise, the game has lots of weapons (the back cover claims 400), ranging from standard swords, through to the far more exciting and genre specific kebab stick's, tenderising mallets and razor blades. Also included is the sort of damage tables that make improvising weapons a true joy, with damage provided for dustbins, bottles of vinegar, bricks, ornaments (large and small) and in fact just about every conceivable household object you could hit someone with. Weapons also effect in which order people act in during combat, building in a system where someone swinging a huge axe can receive a couple of wounds from a smaller faster weapon before they get their attack. This works well, making a good balance between massive weapons which do massive damage, and small weapons which allow several smaller attacks, something modern systems (thinking D/20 here) ignore.

To deal with the effects of all of these "weapons" the game system has 11 pages of critical hit tables, which cover various types of weapon and damage (Bullet (Armour Piercing), Burn (Local), Sword (Large), etc). With a list of effects depending on the severity of the Critical Hit, ranging from minor ("You slam your blade into the floor, and notice that his foot was in the way. A lone toe lies twitching on the floor.") to the more severe ("The headless body stands upright momentarily as the head is propelled by your shot to land with a dull thud"). These make is easy for even the most novice GM to make combat memorable (we still talk about the fight 13 years ago, where a punch onto an opponents hand shattered his elbow), and unlike other games critical hit tables, these remain fresh and interesting due to the sheer size of them, and the huge range of random effects (whereas in Warhammer for example, only about 3 of the effects are ever used, which makes "his head lands D/3 meters away" dull after the 6th or 7th time).

The rulebook comes with a small amount of monsters from various genre films (Zombies, Giant Insects, Candarion Demons (from the Evil Dead movies), Angels of Pain (thinly disguised Cenobites from Hellraiser), etc). However this is a very short list (especially when compared to the list of weapons), and pretty disappointing as the monsters are just about the most important part of any modern horror movie, although I guess the authors intended to increase the number with sourcebooks which were never released. Also included is one fully fleshed out adventure and a couple of shorter adventure synopses, which are all fun and build towards the start of an interesting campaign, but again this is a little brief, but makes for a few sessions of fun slaughter (not necessarily done by the players) and mayhem. It would be nice to have more to work with, but for someone new to the game it provides a good starting point, and a good work-through for the rules.


Although my opinion may be clouded somewhat by the fun I've had playing Blood, I have to say that the game stands up well in comparison to newer games, and while it shows its age, this is now necessarily a bad thing as it shows how games have changed over the past decade, and not always in good ways. Blood remains a good purchase for gamers out of their teens, and although not the heaviest volume available in your local gaming store, is cheap in comparison to most RPG books at the moment, and is worth a read (I've struggled not to quote most of the book here, because its contrast of sickening violence to laugh out loud humour is just damn near perfect).

The official site for Blood: The Role-playing Game of Modern Horror is here


Page designed in Notepad, logo`s done on Personal Paint on the Amiga.
Text by FreddyB, exerpts from Blood are by Norley Tucker. Image is by Paul Campion, copyright resides with Paul Campion/Underground Games.
Any complaints, writs for copyright abuse, etc should be addressed to the Webmaster FreddyB.