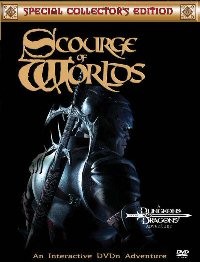 What is it ? : Its a DVD published by Rhino who were kind enough to send us a copy for review and is the DVD age version of the old "Choose your adventure" game-books that were common in the 1980's like the Fighting Fantasy series. Basically it's a DVD which after each chapter presents you with a decision, depending on your choice it plays the results of this decision until you reach the next decision point. There seem to be about 8 or 9 decisions per game, and the back of the box promises over 1,100 different story paths, however since these share many segments between them the disk offers little replay interest.

Bearing the official Dungeons and Dragons label and is set in the Greyhawk game world using some of the characters from the main Dungeons and Dragons rule books. It's all CGI and lasts about 40 minutes depending which path you take through the storyline, the animation is consistently of a high quality and the voice acting while occasionally annoying (although that's probably a triumph rather than a flaw since the character is supposed to be somewhat annoying) is good as is the soundtrack. The background effects are truly excellent in places, the background noises and echoes as they entered the final "dungeon" were especially good and really impressed me. Some people would criticise the script for using modern terms and phrases in this medieval setting, but to me it really reminded me that this was a Dungeons and Dragons adventure, and that these characters were really just alter egos of some gamers.

The storyline is fairly standard fantasy fare and I can't say much more without giving away too many plot details, the party of heroes are sent out to capture a renegade cleric who has stolen an important map from his temple. However like all really good role-playing experiences, the story is more character and emotion driven than action driven, basically centred around whether the cleric can be trusted to be working for good, or if he has been corrupted and is working for evil as his opponents claim. There are some good action scenes, including a rather impressively dangerous looking Beholder and an extremely deadly Dragon and a range of different settings as the story progresses.

The production stands up well compared to other fantasy movies, being far superior to the truly awful Dungeons and Dragons movie that surfaced a few years ago with the added advantage of being interactive.

High Points : Well it's the first of its kind and something that DVD has been long waiting for, the animation is pretty good including some quite astounding character effects (including one jump by the Halfling thief that made me reach for my remote control to watch it again, but more on that below).

Its family friendly and ideal for getting young children into the Dungeons and Dragons product line, my six year old son found it very enjoyable when we all sat down to play through it together, and I intend to try it out with my gaming group soon, as you can all discuss the best decisions to make, making it a good piece of group entertainment as well as being playable by a single player. 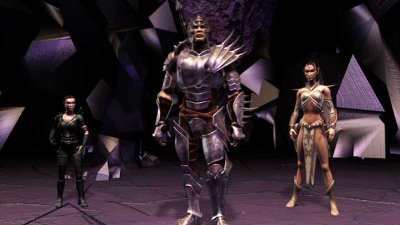 Low Points : Well to be honest CGI dates quickly, and the imagery in Scourge of Worlds looks primitive compared to big budget CGI movies, the worst offender being the characters faces which although doubtlessly took many hours to render looked inferior than some characters in modern computer games (the facial expressions in Half Life 2 pop immediately to mind).

The major gripe I have however is that the DVD locks your players controls, while I can understand blocking chapter skipping as it would allow people to view areas of the story without playing properly, the disk also blocks forward and backwards visual search. This leads to you watching the first chapter over and over (during review I tended to use the 5 minutes of this chapter to get something to eat or boil the kettle for a quick cuppa but it was somewhat frustrating to HAVE to watch it when I really just wanted to get to the first decision point), and led to some annoyance when I spotted something I wanted to reverse and watch again (as mentioned above) only to remember that the controls were locked.

So what do you really think ? : Overall I enjoyed the concept more than I enjoyed the disk, finding it a little disappointing mainly due to the length of the scenes. Although sometimes obviously there needs to be some length between decision points to allow the story to progress, the length of time in Scourge of Worlds was often too long especially on replays. Although there are over a thousand possible storylines, they are all just variations on a theme, so the disk seriously lacks replay value. All that said however, its an enjoyable play and about as value for money as any other DVD even if the storyline lacks the punch of a Hollywood blockbuster. I'd recommend those with a little spare cash jingling in their pockets to seek it out, its not a "must-buy" purchase most roleplayers will enjoy it, and its definitely a worthwhile hire if you see it available on rental.

Final Words : Hopefully Scourge of Worlds will be successful enough to spawn sequels which can address some of the issues in this one, it is definitely something that I think will take off in a big way with a little more polish. 7/10


Page designed in Notepad, logo`s done on Personal Paint on the Amiga.
This Editorial was brought to you by FreddyB, thanks to Rhino for sending the disk for review, Images copyright Rhino.
Any complaints, writs for copyright abuse, etc should be addressed to the Webmaster FreddyB.