Freedom Force vs The Third Reich

What is it ? : It's a sequel to 2002's Freedom Force, in which you control members (usually 4) from the superhero team of the title, Freedom Force (visit the official web-site here). This game is the continuing adventures of the heroes of Freedom Force, as they find history changed and Nazi's ruling the planet, so they have to send members of their team back to the Second World War to put history back on track. An interesting spin on the original, is that there are some masked heroes fighting the Nazi's during the war who join up with members of Freedom Force, however these do not have superpowers, but still manage to make a good accounting of themself.

The game itself although not really roleplaying (dialog is totally scripted, and you have no choice in what missions to take, or what order to play them in), it has Computer RPG elements, with characters gaining experience in each mission they take part in, spending it on new powers, and increasing skills. Also for successfully completing missions in a heroic way (eg not allowing buildings to be destroyed and civilians to be killed), you gain prestige which can be spent recruiting new superheroes to your team.

There are some heroes provided to be recruited, or you can use the in game editor to create your own, either using the models already in the game or adding ones in (either created by you using the editor available on the official web-site, or downloading ones other people have created). Obviously heroes added later in the game have less experience and are therefore weaker, especially if you tend to keep to the same characters all the time, however the game tries to compensate for this by giving heroes on your roster, but not on the mission half of the experience points granted for each mission, allowing them to improve and perhaps be useful enough to be used later.

The game seems to have a darker tone to the new heroes, Tombstone for instance is undead and seeking vengeance for the murder of his wife, which incidentally was the reason he was sent to the electric chair. But the major additions to the team still have to cartoon-style animated "Secret Origin" introductions, which are fun and a joy to watch.

The game itself is battles across various landscapes (mainly cityscapes), commanding your team as they fight enemies or destroy certain key targets. Basically, this is the combat system of a Role Playing Game, gaining experience from battles, improving your characters, and fighting in more battles as the storyline progresses without much input from you. Not that I think this is a flaw, since it has worked well for so many games such as the original Freedom Force and Dungeon Siege, but the games claim of being a "tactical RPG" isn't quite true. 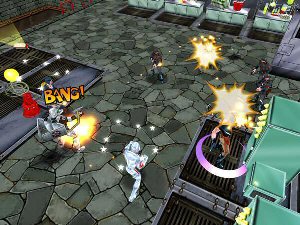 High Points : The graphics, like the first game are extremely comic-book like and look just the part, sound effects vary between realistic and comical, but all on purpose. The voice acting is brilliantly dreadful, with the founder member of Freedom Force, Mentor, sounding ridiculously heroic. The Dialog is tongue in cheek, with the groups leader, MinuteMan, totally over the top in his support of the USA and so right wing that I'm betting he shares more in common with the Nazi's that the team are fighting than most of the players who would pick up this game.

The storyline is good and quite fun, with lots of Commies and Nazi's to biff, as well as cool Nazi Brains in Jars to fight as well. The enemies progress in difficulty throughout the game, with certain situations requiring you to modify your normal tactics to defeat a particular enemy. It's a lot of fun, if becoming a little samey after a while, especially considering the very minor differences to the original game.

Low Points : Well, there's not many really, firstly the character creation system is flexible in the kind of character you can create, but there are few unused character models available meaning either you've got to create your own, or you've got to make a very generic looking hero.

My more major complaint is that this is hailed as being Freedom Force 2, but in reality it's more like an expansion to the 2002 game. The game engine doesn't seem have been greatly enhanced, the characters are mainly the same, and really it just seems to be a new adventure for the old game. Not that this is a huge problem, but it would have been nice to see a little more, especially as seeing that many fans of the original game have created mods to add new missions, campaigns and characters, meaning that this game is really only ahead of these in polish. But that said, polished it is, and looks great for it.

So what do you really think ? : I'll be honest, I love it, I really liked the first game and this is an enjoyable expansion to that. It's not as great a game as Half Life 2, Knights of the Old Republic or Republic Commando, being neither as gripping or as graphically impressive, but it is a fine game and a very fun romp. The multiplayer aspect extends the playability of the game (I never tested out that part of the game, since we had only a single copy), and the ability to make fights between your heroes and enemies is fun adding to the longevity of the game. But to be honest, Freedom Force vs The Third Reich looks a little old in comparison to most other recently released games, and no matter how fun it is you'll feel a little cheated paying out full price for a 3 year old game. That said, if you liked the original, or like superheroes and haven't played the original I can only say check this game out, it's an enhancement for a classic, and a whole load of fun. The best recommendation I can make is that the original Freedom Force is the oldest game I have still installed on my games system which more clearly demonstrates what I think of the game than anything I could hope to write.

Final Words : A good addition to an aged classic, if you like comic book heroes then pick it up, you'll love it. 9/10


Page designed in Notepad, logo`s done on Personal Paint on the Amiga.
This Editorial was brought to you by FreddyB, thanks to Vivendi Entertainment for sending the disk for review, Images copyright Irrational Games.
Any complaints, writs for copyright abuse, etc should be addressed to the Webmaster FreddyB.