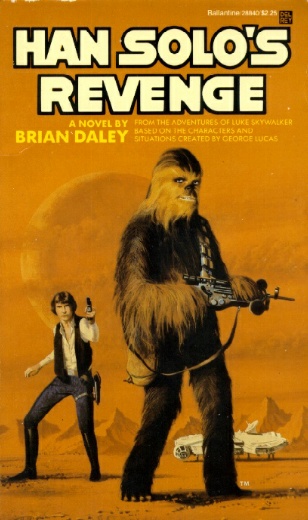 What is it ? : Some problems with the site today means I've written this review twice already, and lost it both times, so instead of writing the story once again, I'm just going to use the description from Wookieepedia, and add my comments below.


After a string of unsuccessful smuggling ventures in the Corporate Sector, Han Solo and his Wookiee copilot, Chewbacca, quit that part of space. Down on their luck after a botched smuggling run on the Rampa Rapids, Han Solo and Chewbacca found themselves on the planet Kamar, showing holodocumentaries to the natives. They soon realized they weren't cut out for legitimate work, and found themselves nearly broke, with no prospects in sight. In these dire straits, Han and Chewie accepted a job offer from an anonymous employer to fly blind for a cool ten thousand credits. However, after flying the Millennium Falcon to the planet Lur for the pickup, they discovered that the cargo was a load of slavesĂ˘â‚¬â€ťsomething neither Han nor Chewbacca had any tolerance for. Some fast thinking by their two droids, Bollux and Blue Max, provided the two with an opportunity to turn the tables on the slavers' attempt to commandeer the Falcon, and escape with both their lives and their ship. As far as Han Solo was concerned, somebody still owed them for their trouble. So they set out to track down the recipients of their intended cargo to get their money one way or another.

Han Solo and Chewbacca set a course for the planet Bonadan, where the slavers' leader, Zlarb, was to meet his contact for payment. Instead of the contact, however, they crossed paths with Fiolla, an assistant auditor-general employed by the Corporate Sector Authority. She was also following a lead on a group of slavers operating within the Corporate Sector, and convinced Han that his only chance of getting paid was to aid her in tracking down the slavery ring. During their investigations on Bonadan, Han and Fiolla discovered that Authority executives may be involved in the slavery ring. In the meantime, Chewbacca foils the attempted repossession of the Millennium Falcon by a Tynnan skip tracer named Spray. After reading Zlarb's data plaque, the group made plans to travel to the planet Ammuud, to investigate the slavers' connection to the shipping firm of one of the governing clans there. Unfortunately for them, the slavers were watching Fiolla and were keeping their eyes on Han and Chewbacca now, as well. Due to some unfortuitous circumstances with the slavers watching the Falcon, Han and Fiolla are unable to board the ship, and the two smugglers are forced to split up. Chewbacca, Spray, and the droids lifted off in the Falcon, while Han and Fiolla were forced to seek passage on a passenger liner.

En route to Ammuud, the hull of the Millennium Falcon was compromised by a sleeper bomb placed by the slavers on Bonadan. The crew had to make an emergency landing in the mountains on Ammuud. Prior to planetfall, however, Spray sent the two droids to the spaceport in a lifeboat, in search of Captain Solo. Meanwhile, the liner that Han Solo and Fiolla were aboard was hijacked in transit by the slavers, in an effort to capture the pair. The couple was able to escape detection in a lifeboat of their own, and arrived on Ammuud with the hope of uncovering the evidence Fiolla needed to implicate the high-ranking Authority officials in the slavery ring. After Han had befriended the Mor Glayyd, by foiling the plot of Gallandro to harm the clan leader, he was furnished with the permission and the repair parts to search for his missing copilot and starship. After finding Chewie and the Falcon, making repairs and raising ship, the crew was beset by the slavers once again. It was the Corporate Sector Authority and Gallandro who came to their rescue, however.

The gunman was actually coming to the aid of his superior, Spray, who was in fact the Corporate Sector Authority's Territorial Administrator Odumin, working undercover to expose the slaver ring and the corruption within the Authority. Despite the circumstances, Han Solo and Chewbacca were to be placed under arrest for previous crimes committed against the Corporate Sector Authority. In a daring attempt to escape incarceration, the pair of smugglers kidnapped the Authority administrator, and were able to barter for their freedom and collect their payment at long last.


High Points : I loved this book from my first read, and it's not only the main storylines I adore, it's the glimpses we get into Han and Chewies further adventures. For example at the start of this book they're trying to make an honest living by travelling to a backwater planet and showing them movies. Everything goes wrong however, when they change the really bad documentary they've been showing about a water world for a more modern movie. However, they haven't realised why everyone is coming because the images of a water world on the desert planet they're visiting and they've actually managed to form a rudimentary religion, so changing the religion makes them the subject of a riot amongst the tribespeople.
The little details really flesh out the universe, from the neon beer bottles which play jingles and a lightshow when opened, the weapons detectors that swivel around as you walk past sensing for weapons. The Spaceport with it's waiting lounges and bars, and the rental hover scooters, and powerful swoops (beefed up Repulsorlift bikes) used by gang-members. And the details make the universe more real, Han and Chewie gambling on who can take out the most enemies when they're in the turrets, with the area where the guns fields of fire overlap worth double, so they call it Money Alley. These novels really filled in what the Galaxy Far Far Away was like, when you're not getting in a Starfighter to save the galaxy.

The character Spray, the Skip Tracer reveals himself to the Corporate Sector Authority's Territorial Administrator Odumin, in a shocking twist which to me at the time was far larger than "I am your father". Spray had become an indispensable part of the crew by the time of the reveal. He helps pilot the Falcon while Han and Chewie man the guns, his life is at risk after the Falcon is sabotaged and crashes onto Ammuud, and while him and Chewie are stuck there, he feeds the two of them by using his aquatic nature to swim in the lake, hunting for fish and cooking them for the two of them, He's a great addition to the crew, not brave by nature, but resourceful and not cowardly, I looked forward to him joining the crew and helping out for a while, so when his duplicitousness is revealed I was in shock, and as i'll mention below, I dealt with that in my own way.

Low Points : Now it's difficult for me to be objective, as I've owned and read this novel for 40 years, my one criticism would be that it's obviously aimed at a younger audience, so perhaps talks down to a more mature reader, but that said the novels a fun fast paced romp, with loads going on even if the situations are perhaps over simplified.

So what do you really think ? : I loved this book so much as an 8 year old that it totally influenced my view of the Star Wars universe. As I wrote in my review of Han Solo at Stars End, the young me named some of his Star Wars figures after characters in the Han Solo novels, so my Death Star Droid I called Zollux, an R2-D2 with broken off legs was Blue Max, and my Walrus Man cantina figure was called Spray. And he travelled in the Millennium Falcon with Han Solo and Chewbacca, he sat in the cockpit at the controls when Han was in the Turret, and later when my Han Solo figure got broken and thrown out, he took the controls and the adventures continued with Spray and Chewbacca aboard the Falcon having adventures.

Final Words : I had a problem when I reviewed Han Solo at Stars End was that the Han Solo and the Corporate Sector Sourcebook by West End Games was so good, that there wasn't anything left for me to cover. And Han Solo's Revenge looks to have a similar problem, although hopefully there will be something I can cover, even if it's just a neon beer bottle.