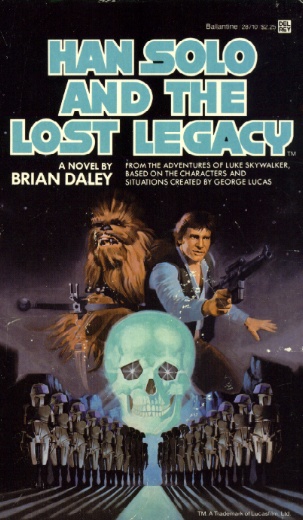 Han Solo and the Lost Legacy

What is it ? : Having frittered away their "rewards" for stopping the smuggling ring in the Corporate Sector, Han, Chewie, Zollux and Blue Max end up on the University world of Rudrig, where Han meets an old comrade, Badure. Badure has fallen on bad times himself, but has discovered what he believes to be the flight recorder for the Queen of Ranroon, the treasure ship for Xim the Despot.
Xim was a dictator many millenia before, and when he was defeated, his treasure ship filled with the resources to fund his next stage of galactic domination was lost on it's journey to his treasure vaults on Dellalt.
They head to Dellalt where the flight disk is hidden, along with a professor who is going to translate the disk, and while they are attempting to obtain the disk, the Millenium Falcon is stolen.
Trekking across the surface of the planet, they encounter a cult which is decended from the survivors of the Queen of Ranroon, who brought the treasure back to Dellalt all those millenia ago, and put it in a hidden area of the vaults. The cult also has access to the war robots of Xim the Despot, and are preparing to send them against the population of Dellalt rather than have the treasure discovered.
Blue Max reprograms the war robots, and stealing the Falcon back the heroes head back to the vaults to get the treasure, unarmed because the vaults have areas secured with automated weapons which emit warning lights, then kill any armed individuals. They are confronted by Gallandro the Gunman, out for revenge on Han for his actions in the last novel. After easily defeating Han, and leaving him wounded in a corridor, he heads after the professor, who has disabled the warning lights for the automated weapon emplacements, and Gallandro's reactions are useless against the speed of light circuitry of the automated systems.
Heading into the vault, they discover the treasure is now worthless, it consists of the supplies that Xim's armies would have needed, now millenia out of date, and valuable only for it's historical interest.
Badure, Blue Max and Zollux stay with the professor to act as consultants (Blue Max and Zollux since they interacted with the War Robots) in the research, while Han and Chewie head off to raise some money by doing an easy smuggling job for Jabba the Hutt.

High Points : This is my least favourite of the three Han Solo novels, and while there are numerous remarkable scenes, I'm struggling more with this one to remember them.

The introduction of an old comrade of Han's, Badure is brilliant. Han has always been a bit enigmatic, or at least he was back in 1980, so having someone who tells tales about knowing Han is great. Badure chat's away, mentioning Han being drummed out of the military (hinted because he was freeing Chewbacca from slavery), that the stripes on Han's trousers are "Corellian Bloodstripes", awarded only for bravery in combat, and very rarely awarded to anyone.

The setting of Dellalt is an interesting one, a world which once was important, now reduced to using a field as it's starport, and tourism to its historical sites, we always knew Tatooine was a backwater, but somehow Dellalt manages to be even more so.

And although it's a bit obvious, I really enjoyed the ending, with Han and Chewie down on their luck, so heading off to Jabba the Hutt for work. to a 9 year old me, it felt like a revelation when I realised it was the run they would be being hunted for throughout the original trilogy.

Low Points : Once again, I'm clouded by almost 40 years of owning and reading this novel, but I have difficulty finding any real problems beyond the fact it is targeted towards younger readers. Perhaps even more so that the previous novels.

So what do you really think ? : I loved all three of these novels, and highly recommend them to anyone wanting to see the early stages of the Expanded universe. This one is a little too Indiana Jones, and for a Han Solo novel, there's a total lack of starship combat, but it's still an enjoyable romp, with great characters, and a wonderful ending which wraps up this trilogy and leads Han onto his entry into A New Hope

Final Words : Well, for the last week (between Seasons 5 and 6 of Clone Wars), I've been digging back into my personal history, the books I read as a kid which helped me love the Star Wars universe more and more. And that was all of the Star Wars novels I read until the Heir to the Empire novels by Timothy Zahn, and I haven't really read any since that trilogy.
These 4 books I've reviewed over the past few days really launched what was to come, and helped flesh out the Star Wars universe. Where the movies would cover the space battles and the rulers of the galaxy, I found it fascinating seeing the grubby bars, starports and backwater worlds which seem to make up much of the galaxy, and fingers crossed that's what the Solo: A Star Wars Adventure movie will show us.