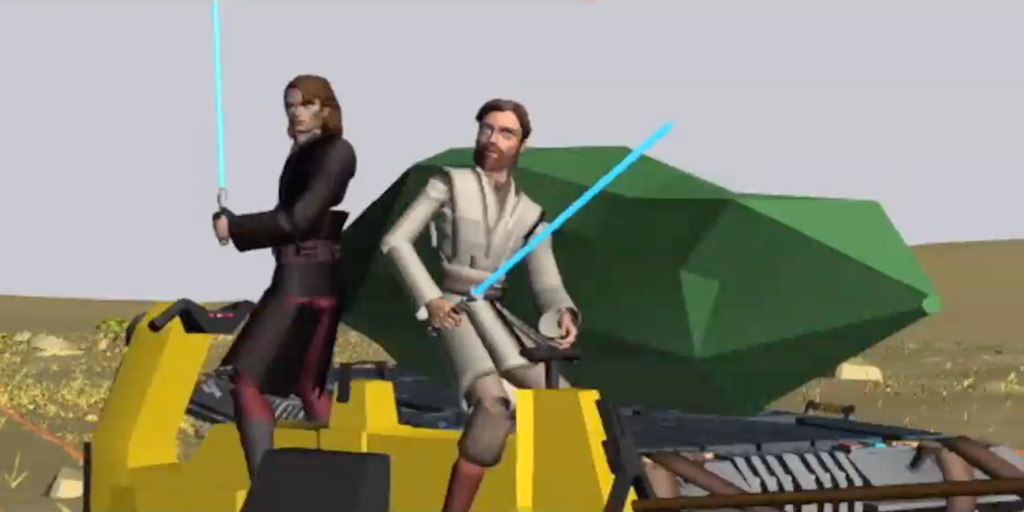 What is it ? : Obi-Wan and Anakin rush to the bridge of the ship the Crystal is aboard, but as they attempt to launch the vessel it's engines overload and it crashes back to the ground, sabotaged. They decide to take the crystal aboard a repulsorlift platform back to the city, but need something to tow the platform, so head to a nearby village to steal some beast of burden, but can only convince a single horse-like creature to come with them.
Using the force to lower the crystal onto the platform, they slowly move away from the crashed vessel, and are soon caught up by the Sugi aboard speeder bikes. But the Sugi blaster fire hits the crystal, refracting through it in a blaze of energy which takes out much of the Sugi forces. Anakin steals one of the Speeder bikes, which they begin towing the platform at a higher speed.
As they approach the city the Sugi catch up again, and are joined by MagnaGuards aboard STAP's. General Grievous arrives and is met by the Governor and the Sugi leader, who he kills when he discovers the Sugi have lost the crystal to Jedi.
Heading down into the sinkhole city, Anakin and Obi-Wan lead a running battle down into the pit and through the caverns which comprise the city. Grievous joins the chase, but after being forced into a herd of cattle, he crashes, allowing the Jedi to reach the landing platforms. They are surrounded by the Governor and Battle Droids, but take him hostage and kill the Battle droids while they are unable to fire. The Droids however make it away with the crystal, and Anakin and Obi-Wan fleet aboard a shuttle.

High Points : The episode mainly comprises a chase, from the crashed vessel to the landing platforms at the Utapau capital city. The tension is kept up, and the variety of action within this chase is good, from defending the slowly moving platform as it is towed by a beast, to more high speed skids and turns as they go through the streets of the city, to having to defend the platform as MagnaGuards leap aboard it. The action is well presented and keeps your interest by constantly changing within the framework of being chased.

The dialogue is excellent, we've gone within this storyline from Anakin being angry at the loss of Ahsoka, to Obi-Wan at his most sarcastic, there are lots of throwaway jokes showing how close these two characters are, and how ell they know each other.

Low Points : While they're attempting to gain something which will pull the platform, Obi-Wan is spotted by a local, and uses the Jedi Mind Trick to make them forget that the Jedi were there. Yes, Obi-Wan uses the force to rustle cattle. . .

When Obi-Wan and Anakin are lowering the crystal, they have to cut the ropes holding it in place at the same time as levitating it. Anakin asks how they'll do this, and Obi-Wan tells him to use one hand to cut the cable, and the other to hold the crystal. Really? Now the amount you're lifting something depends on how many hands you're using? What happened to size matters not?

I speculated yesterday on how the Amani were involved in the deal to exchange the crystal, well it's revealed in this episode. They're hired to secure the area, and that's it. With the Governor of the entire planet in their pay, they somehow need a tribe of fairly primitive tribesmen to secure the area? Doesn't seem to make a whole load of sense to me.

So what do you really think ? : I enjoyed this episode, if completed it could have been pretty good if some of the flaws had been polished out in script updates. But as seen, it's a flawed but watchable episode.

Final Words : This storyline is definitely look as being one of the better ones, even in their unfinished state they're far better than two of the storylines broadcast in season 4.