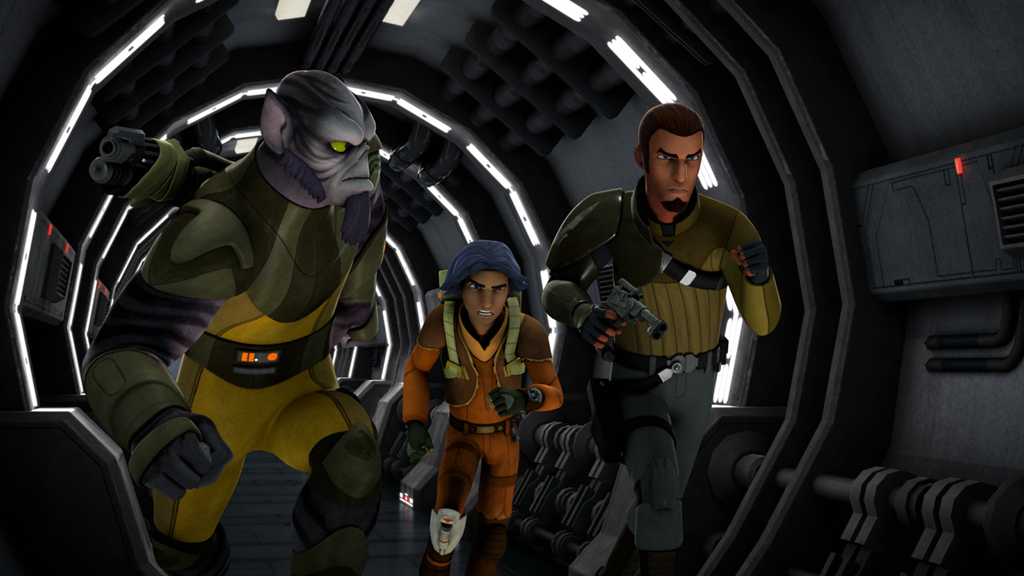 What is it ? : The story begins with a prologue with a character in dark armour, resembling Darth Vader without his helmet, pale, bald and sickly, receiving instructions from Vader, that the Jedi have been virtually exterminated, but the children of the force may be a threat and should not join the Jedi, and should be exterminated if they do not join the Empire.
We then move to a high tower in the wilderness of what we discover later is Lothal, where a youth, Ezra is looking out at the capital city in the distance, when the sun is blocked out by a Imperial Star Destroyer heading towards the city.
Heading off on a Speeder Bike, Ezra encounters two Imperial Officers and some Stormtroopers shaking down a Gotal Merchant, who complains that things used to be better before the Empire. Ezra steals one of the officers comlinks, and sends a signal alerting them of an emergency, so they abandon their arrest and head off to deal with this situation.
Ezra takes food from the merchant, and follows the Officers to see what happens, and feels something, tracing the feeling to a bearded man, who is quietly signalling other people around the officers. As the man and his comrades set off an explosion, they steal some speeder bikes hauling supplies, but Ezra claims one for himself. This leads to a chase, introducing the man as Kanan, and his comrades as Zeb and Sabine. Kanan chases Ezra through the city and out into the countryside, where they are ambushed by Tie Fighters, and Kanan's ship, piloted by Hera and Chopper come to the rescue.
Ezra explores their ship, the Ghost, being led by the force to Kanan's quarters, finding a lightsaber, and a Holocron which he steals.
They jump to hyperspace to lose the Tie Fighters, but they return to Lothal, to a settlement where those evicted from their homes and businesses by the Empire now live, called Tarkintown. Ezra sees the group selling the crates they stole, which contain Blaster Rifles, and distributing food to the needy. Their contact sells them information about Wookiee Slaves being transported, so the group heads off to rescue the Wookiees catching up with a Gozanti class cruiser in deep space.
They board it, but Ezra is still very self centred and refuses to put himself in danger for Wookiees he doesn't know, but after they discover it's a trap as a Star Destroyer comes out of hyperspace, and communications with the team aboard the cruiser is jammed, Hera motivates him to help out, and he heads into the cruiser to warn everyone.
Fighting their way back to the Ghost past ISB Agent Kallus and some Stormtroopers, they manage to escape, except for Ezra who is captured. Ezra is jailed aboard the Star Destroyer, and while left in a cell, he manages to activate the Holocron, seeing Obi-Wan's message that the Jedi order and Republic have fallen. He manages to trick his guards and escapes, stealing a helmet and comlink from a storeroom. Listening to the comlink, he finds out two things, firstly the Wookiee's have already been delivered to Kessel, and secondly that the Ghost has returned and the crew are trying to rescue him.
He meets up with the crew of the Ghost, and they escape, but Agent Kallus discovers that Ezra had been using a comlink, and works out that he knows about the Wookiees.
Ezra informs the crew of the Ghost about the Wookiees and head to rescue them, but Kallus springs another trap, leaving the crew stranded as the Ghost is attacked by Tie Fighters, and Hera and Chopper are forced to take off to deal with the threat.
This forces Kanan to do something he has been hesitant to do, revealing himself as a Jedi and using his lightsaber to parry the Stormtroopers attacks. The Ghost manages to pick up the crew and the Wookiees, dropping them off with an anti-slaver ship and returning to Lothal.
Kanan and Ezra discuss the Jedi and the Force, Kanan recognising the Ezra is strong in the force or he wouldn't have been able to open the Holocron, and Ezra recognising that he has a place aboard the Ghost rather than returning to his life as a petty thief.
Meanwhile, Kallus contacts the Inquistor, the character from the prologue, informing him a Jedi has been seen, who is pleased at Kallus reporting this to him.

High Points : Wow, this gets off to a great start, with Ezra watching the Star Destroyer approaching Lothal's capital city, very reminiscent of the beginning of A New Hope. And the story is action from beginning to end, and I particularly loved the speeder bike chase through the streets of Lothal, into the wastes surrounding the city, and the design of Lothal, very reminiscent of Mos Eisley and it just screams that it's in the same universe that we know and recognise.

Kallus is a well developed villain, who is intelligent, making him a real threat without just making him super-powerful, and there is something quite compelling about him from the start, he definitely has a personality and seems well rounded and competent.

With the team already existing and operating, the introduction of Ezra is a great way of introducing us to the team and how they operate as well, we're not overly bombarded with information, but we get to see the makeup of the team, with Kanan, Zeb and Sabine operating as ground operations, and Sabine and Chopper operating as the flight crew of the ship.

Low Points : I found the episode to be well done right from the start, and although the bickering between Zeb and Ezra is a little overdone and could be annoying, this is a minor point to me but I know it put other people off the series from the start.
I also found Ezra's resistance to joining the group and helping people a little annoying, it wasn't a particularly well conceived plot point as we aren't given any reason for this resistance to joining a group, and his life isn't so great that he's losing something by joining them. It's obviously the right thing to do, and lets be honest, we know he's one of the heroes, so just get on with it and join. But to give them credit, perhaps they're setting up later plot points.

So what do you really think ? : I really enjoyed this episode, although I've seen Rebels before, I haven't seen this episode since it first broadcast, so maybe 5 years ago? And really didn't remember the details, so critically I can find a few minor points to moan about, but in general the episode is fast paced, well written and enjoyable throughout. It's also nice to rewatch and see what developed, and what they got right straight from the start.

Final Words : No point in hiding it, I'm a big Rebels fan, so I doubt there will be many scores which are lower than 8's, but I'll try to be honest, and my love of the series might lead to me being hyper critical when it gets things wrong.