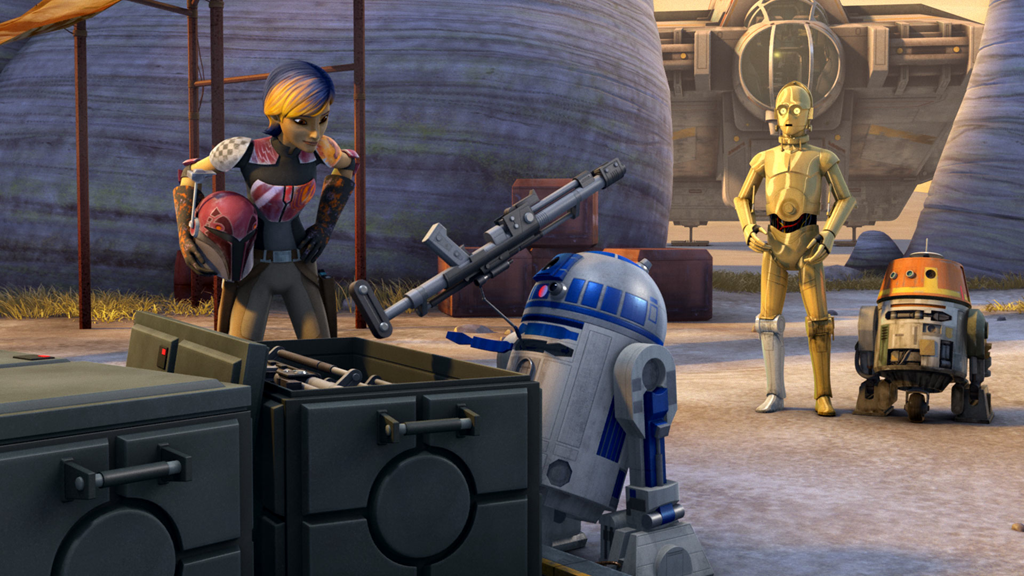 What is it ? : Running low on supplies and money, the Rebels are forced to take another job from Vizago an underworld crime-lord, a situation not helped by the fact Ezra is not feeling accepted by the crew, Zeb doesn't completely trust him, and Kanan isn't providing the Jedi training he promised. The job is to steal some Imperial cargo, and to locate it they board a passenger vessel where the owner of the cargo and the Imperial officer buying it are travelling across the system.
The owner of the cargo is an Aqualish, who requires a protocol droid to translate for him, and C-3PO and R2-D2 board the ship in that role. Chopper provides a distraction, causing all droids to be moved to the cargo area, meaning that the transaction cannot continue, however Sabine pretends to be a cadet at the academy and offers her translation services, sending the Imperials to hangar 17 when they land, when the cargo is actually in hangar 7.
The Rebels locate the cargo, and discover it is Disruptor rifles, a weapon banned for it's inhumane way of killing, and Zeb is particularly distressed by this. As they are loading the cargo, the Imperials have discovered their deception, and turn up at the correct hangar, and combat breaks out, with the Rebels getting the disruptors aboard the Ghost, and R2-D2 and C-3P0 as well.
They head towards Lothal, to make the exchange, but the group are split as to whether they should deliver the weapons or not, and it is revealed that most of Zeb's species was killed by the Empire using such weapons.
They need the supplies however, and the trade would keep the weapons out of the hands of the Empire, so they meet with Vizago to make the trade, however C-3PO contacts the Empire to reveal he has been captured by the Rebels, and reveals their location, so before the trade can be completed a Gozanti Cruiser drops off two walkers along with Agent Kallus, and Vizago calls off the deal, leaving with half the cargo.
The Rebels fight off the Imperials, and Zeb fights Kallus, who reveals he was the officer in charge of ordering the use of the weapons against his people, a revelation which shocks Zeb putting him at a disadvantage, but before the killing blow can be struck, Ezra force pushes Kallus away, and the Rebels flee.
R2-D2 reveals their owner will pay for the cargo, and the safe return of the two droids, which he does, generously, however his identity remains unknown to the Rebels, but known to the audience as Senator Organa.

High Points : I noted this yesterday, but never mentioned it in my review, the music in Rebels is brilliant, with themes similar to the movies, but unique in their arrangement making it familiar enough to evoke emotions, but still remaining very much it's own thing.

The characterisation is brilliant, with the emerging of Zeb as gruff but with reasons to be, the story of his people emerged naturally and later revealing Agent Kallus's involvement with it.

I really like the dynamic of the crew of the Ghost, while Kanan is the obvious hero being male lead, and a Jedi as well, he's not actually the groups leader, Hera is, as captain of the ship she's in charge and deftly dealing with Ezra's dissatisfaction with not getting any training, promising to deal with it. We haven't seen too much of Sabine yet, but the fun that Zeb and Sabine seem to generate in causing chaos with the Empire is great to see.

Low Points : While R2-D2 kind of make sense in the way they are inserted into the plot, with C-3PO being needed as a translator for the Imperial deal, and R2-D2 acting as Organa's spy in reporting back about the Empire's activities and the fledgling Rebellion. It does feel a lot like stunt casting, which I don't think the series needed this soon. I'm aware the Lando, and Leia make appearances later, but in the first normal episode of the series bringing in original trilogy characters feels a little jarring as if the series needs to lean on the star quality.

So what do you really think ? : While I can see where the series is still finding it's feet, there's no teething troubles as there was in Clone Wars, we're still in the first normal episode of the series and we're developing the villain, giving backgrounds to some characters and building the relationships within the crew.

Final Words : After almost a year doing a review one day, and then stats the next, this is the first time I've rushed to do an episode, reviewing and preparing stats the same day to get on with things because I'm tempted after every episode to just watch the next.