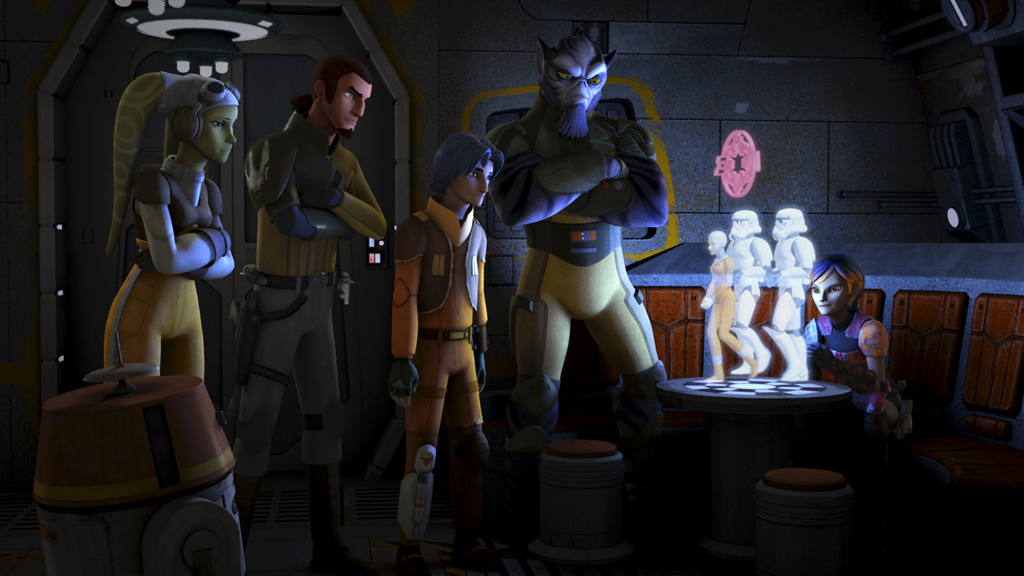 What is it ? : The episode begins with Ezra and Kanan training on the top of the Ghost as it hovers high in the atmosphere, Chopper and Zeb are "helping" and distract Ezra causing him to fall from the ship, plummeting towards the planet below. Kanan levitates him back aboard.
Kanan feels that he is failing to train Ezra properly, so when he hears that Luminara Unduli is under Imperial custody he decides the Rebel should rescue her and she could take over Ezra's training. This leaves Ezra feeling as if Kanan wants rid of him, by passing his training to a stranger.
They go to Stygeon Prime to break into the prison where Luminara is reported as being held, entering the facility by jumping from the Phantom onto a docking pad high on the tower. Fighting their way through the tower, leaving Zeb and Sabine to secure their escape through the elevators, Ezra and Kanan make their way to Luminara's cell, discovering an illusion of her that floats to a sarcophagus containing her remains.
They are then ambushed by the Inquisitor, who reveals that Luminara has been dead as long as the Republic, and on duelling Kanan, he reveals intimate knowledge of the Jedi by recognising that Kanan was trained by Depa Billaba from Kanan's fighting style.
The Inquisitor totally outclasses Kanan, and shrugs Ezra's attacks off with ease, however using explosives give them by Sabine, they surprise him and flee through the base, escaping aboard the Phantom.
Back on Lothal, Kanan begins training Ezra once more, saying he might make mistakes, but he would honestly train him, instead of just trying as he had been before.

High Points : The Inquisitor is a brilliant villain, menacing, skilled and devious, he shows knowledge of the characters, has put into place a plan to capture them, and keeps springing surprises on them throughout. Perhaps the most visually impressive of which is his rotating lightsaber, which takes Grievous's swinging a saber light a blade in a blender to its ultimate conclusion.

I must also draw attention to the training session at the beginning of the episode, which although a little stupid and dangerous is visually stunning and exactly what Star Wars should be. Why have characters train in the desert when you can them training on the back of ship thousands of feet in the air.

The use of Luminara Unduli is also excellent, it reinforces the idea that the Rebels are on their own, there's not going to be any Jedi Masters coming to the rescue and they're going to have to solve all their problems on their own.

Low Points : While I'm full of complements for the training sequence at the beginning, the fact that Chopper causes Ezra to tumble from the ship almost to his death is glossed over in a fairly glib manner, as if droids should endanger crew members as part of their wacky personality. Chopper even taunts Ezra after he's been narrowly rescued by Kanan and Zeb, if it were me, I'd definitely be checking him in for a memory wipe.

So what do you really think ? : Another enjoyable episode, introducing a the villain for the season, the fun and games the characters have been having up till now has suddenly had real threat introduced, and while they're still heroes and capable of getting out of danger, this time it was definitely uncomfortably close for them.


Final Words : Rewatching these early episodes is showing me how Rebels found it's footing straight from the start, any teething problems are minor, and so far are all about the relationship between Ezra, Zeb and Chopper which is unprofessional and leads to unwarranted dangers they could easily avoid if they behaved professionally.
I can't clearly remember this lasting long, and I wonder how long it takes them to settle down?