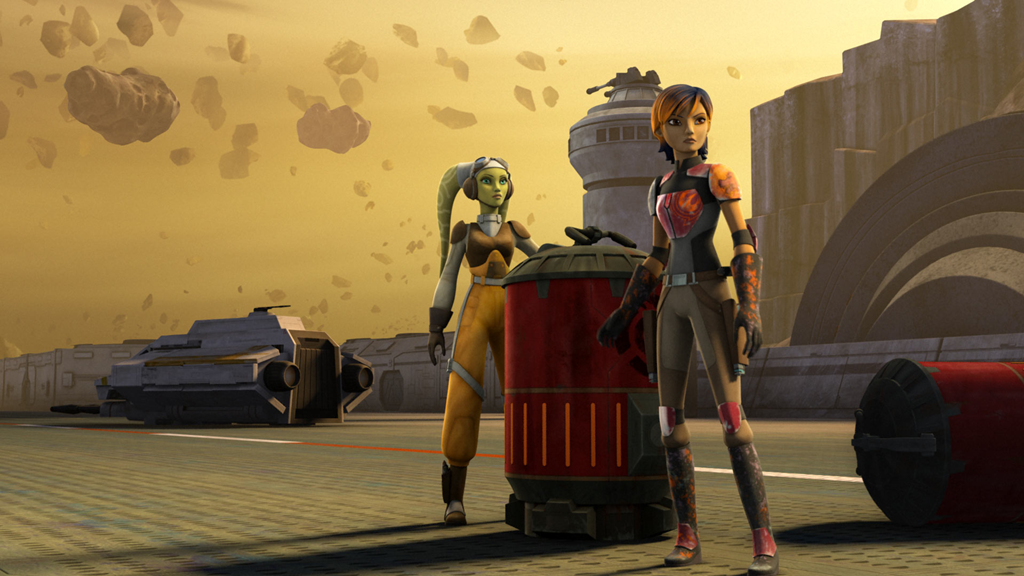 What is it ? : Hera, Ezra and Sabine are returning from a mission aboard the Phantom, and are being chased by Tie Fighters, by flying through rocky outcrops and ravines, Hera defeats the Tie's, but the Phantom is damaged.
Ezra, Zeb and Chopper are assigned to repair the Phantom, but their usual squabbling gets in the way and they repair the control systems, atmospheric systems, but fail to notice a fuel leak.
Sabine is bothered by the team following instructions from their contact, "Fulcrum", without knowing who they are, especially when those instructions led them into danger unprepared, so she accompanies Hera to meet with Fulcrum.
They take the Phantom and head to the Anaxes asteroid field, landing at the remains of Fort Anaxes a Clone Wars era base which has been abandoned.
They see no sign of Fulcrum, but there are supplies that their contact has left for them, and they begin loading the Phantom, noticing that some of the cargo has been dragged off into the base.
Following the trail, they find the crates smashed open, and in the darkness they encounter a group of fierce creatures which they fight a retreat out of the base, discovering the creatures will not emerge into the sunlight outside. But the two realise that one of the asteroids will soon block the sunlight allowing the creatures to attack. They also discover the fuel leak has disabled the Phantom, so they call the Ghost for rescue, which won't arrive for some time.
They begin to build a defence of the Phantom against the creatures, planting barrels of explosive compounds in between the vessel and the base, and lure the creatures into traps before using their blasters to detonate the explosives, killing groups of the creatures. But there are too many and they are forced to make a last stand on the roof of the Phantom, but the Ghost finally arrives, and the creatures recoil from it's floodlights momentarily, before realising that the light from the Ghost doesn't hurt them like the sunlight.
Hera and Sabine leap aboard the Ghost, and the larger ship collects the Phantom as they flee into the atmosphere, however the Ghosts hull is attacked by the creatures who have climbed aboard while they were collecting Hera and Sabine. Hera electrifies the hull of the ship, forcing the creatures to fall back onto the surface of the asteroid.
Afterwards, Hera and Sabine discuss that they trust each other with their lives, so Sabine has to trust Hera with keeping the identity of Fulcrum secret.

High Points : The setting is brilliant, with the heroes fighting amongst an abandoned Clone Wars era base, which not only shows that this is clearly the same universe as Clone Wars, but also shows the desperation of the Rebels, who are still using the remains of the Clone Wars to shelter and pick for supplies.

The creatures, Fyrnock's, are a credible threat, with the two heroes unprepared and without a way of escaping. They have a limitation which the heroes can take advantage of, but are still a deadly threat. The tension as darkness falls, and waves of the creatures swarm out towards the two heroes is brilliant, as well as the fake out ending when the creatures recoil from the lights on the Ghost, leading to you believing that they have been rescued, but then the creatures realising that the artificial lights of the ship don't harm them and returning to the attack, making you realise that this isn't over yet.

Low Points : The problems in the episode all come from Ezra, Zeb and Chopper squabbling again, which I thought we'd had an episode to settle with Ezra and Zeb building trust. However their unprofessionalism leads their teammates into danger, I don't mind some joking between characters, but when they're endangering each other, I begin to mistrust the characters.

While Hera and Sabine are on the top of the Phantom fighting the creatures, there is a repeated scene, as Hera kicks one of the creatures in the face, then the two girls swap sides. It's a nicely done maneuver, but the repetition distracted me.

Something which has been in Rebels since the start, which I noticed but it didn't bother me until now is the design of the Tie Fighters. For some reason in Rebels they're kind of fatter than I'm used to, with stubby little solar panels. While I think the animation style of Rebels is a lot nicer than that of Clone Wars, this is one particular design choice that bothers me.

So what do you really think ? : I really enjoyed the episode, and while I've got some problems with it, it's really action packed and enjoyable. It also introduces some future plot development with the introduction of "Fulcrum" and the mystery of their identity. But the thing I really want to discuss is Hera's Hat, with it made of a white cloth material, and there being two thinner tubes for her Lekku, it constantly makes me think she's wearing a pair of white jockey shorts on her head . . . . . Just saying.

Final Words : Rebels continues to find it's feet, and to work out what's working and what is not, but taking that into account this is a great episode, seeing Hera and Sabine having a disagreement which they deal with professionally and still manage to get on with the job of being heroes is fantastic, which makes the unprofessionalism of Zeb, Ezra and Chopper more annoying.