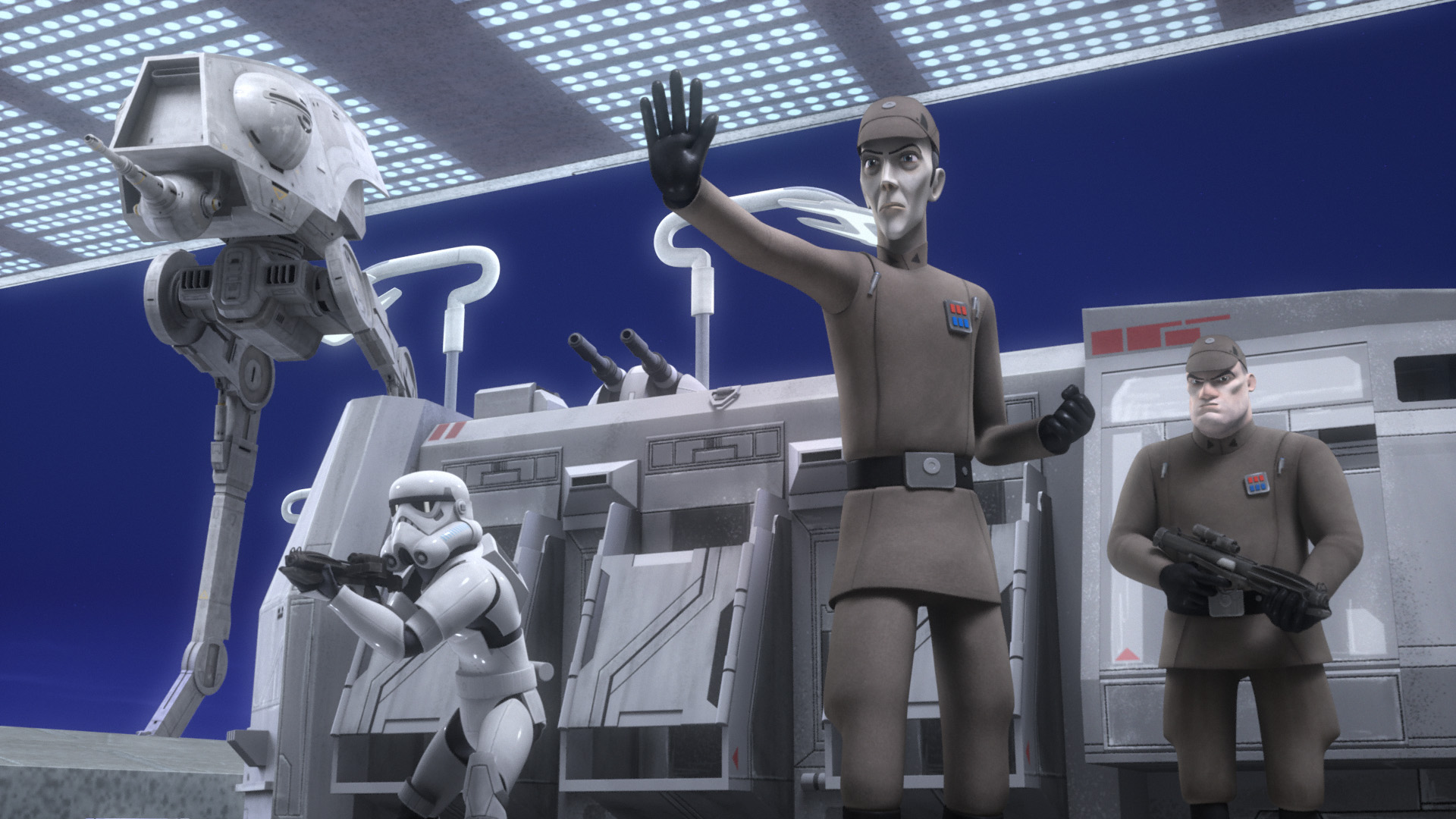 What is it ? : Ezra and Kanan are training outside a village on Lothal, which isn't going well with Ezra remarking it's not a good day, when a flight of Tie Fighters set down at the village so they go to investigate.
The Tie Pilots are bullying townspeople into participating in the celebrations for Empire Day, and they are searching for a Rodian. Ezra recognises the Rodian, and the rest of the team begin plans for disrupting the celebrations.
They successfully destroy a prototype Tie fighter being shown off at the celebrations, and Ezra leads them to a hiding place in the town to avoid pursuit, where the Rodian is hiding out too. Ezra reveals that the Rodian was friends to his parents who made seditious broadcasts against the Empire and were taken from him 8 years ago when he was 6. The Rodian reveals that Empire day is Ezra's birthday. The Rodian has a cybernetic brain implant, which contains the Empires 5 year plan for Lothal, as well as extensive blueprints for their vessels, and records of troop movements, all data which would be important for the fledgling Rebellion.
They steal an Imperial Troop Transporter and race for the outskirts of the city and a rendezvous with the Ghost, but a number of Walkers and another Troop Transport block the way, so they have to bust through the blockade, which slows them enough for Agent Kallus aboard another Troop Transporter with a Speeder Bike escort to catch up with them. A battle breaks out, and they manage to board the Ghost, as the Inquisitor in his Tie Advanced with a Tie Fighter escort intercept them as they blast for space and escape.

High Points : The episode really shows the effects of Imperial rule over Lothal, from the mandatory propaganda broadcasts, to the forced cybernetic modification of workers, the Empire attempts to crush people and civilisation to it's will. It really shows how the Rebellion isn't just a political movement as has been shown before, it's a movement to restore the individuals rights and freedoms.

The chase aboard the Imperial Troop Transport is especially worthy of mention, with action from beginning to end, as they come under attack from the blockade and from pursuers, and Agent Kallus still remaining a credible threat even if he is defeated once again, a fantastic balancing act from the writers to allow him to be defeated without just becoming incompetent comic relief.

Low Points : While this episode is free from the bickering that has plagued the episodes recently, and no character endangers the others, having Ezra keeping secrets from his comrades just seems as if they should have gotten past this by now, he objects to training on Empire day without detailing his parents kidnap by the Empire, or the fact that he is reminded of this by it being his birthday, I just feel that they should have discussed why he's part of their group when he's only 15 years old without any parents being mentioned.

So what do you really think ? : Another enjoyable episode with some great action, and the series first "to be continued", and multipart story. The feeling that Lothal is a world being crushed under Imperial control is palpable, and the network of contacts that the Rebels have within Lothal society is believable with them not being totally alone against the Empire.

Final Words : Well, I'm definitely looking forwards to the next part, and I can only assume the Rebels getting in contact with the larger Rebel Alliance and the struggle across the Galaxy. I can only assume that seeing they are part of a larger struggle will have a positive effect on the heroes.