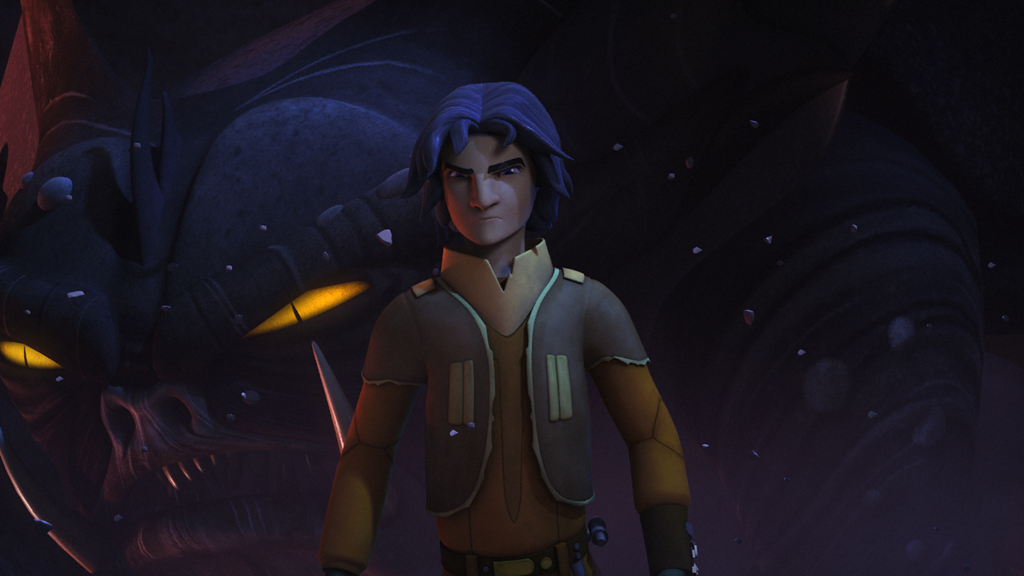 What is it ? : Picking up from the last episode, the Ghost is fleeing Lothal with Tseebo the Rodian aboard and the Inquisitor and Tie fighters in pursuit. They fight the Tie's, but Chopper is hit and taken out as is their astrogation computer meaning they cannot make the jump to Hyperspace, while they try to repair the astrogation computer, the Inquisitor fires a tracking module onto the Ghost, before Tseebo comes to the rescue transferring the hyperspace coordinates directly from his cybernetic brain modification and they make the jump.
Ezra talks to Tseebo, and discovers that the Rodian had failed to protect his parents which had resulted in the Empire coming for them, but Tseebo reveals that the Ghost is being tracked. The tracking module never hit the Ghost however, attaching instead to the Phantom, docked with the Ghost. Figuring that even without the tracking module, the Inquisitor may be able to track Ezra and himself, Kanan takes the two of them in the Phantom, undocking from the Ghost while still in hyperspace and heading to the Asteroid base from two episodes ago "Out of Darkness", relying on the Fyrnock beast there to be a danger to the Imperial forces.
While the Ghost meets with a Corellian Corvette, and transfers Tseebo to their contact Fulcrum. Kanan coaches Ezra on forming a force link with the Fyrnocks on the Asteroid to get them to fight alongside the two Jedi, and dumps the tracking beacon.
However the Fyrnocks are no danger to the power of the Inquisitor, although do successfully take out his escort of Stormtroopers, and Kanan and the Inquisitor end up duelling, in which Kanan is badly outmatched and the Inquisitor. Ezra calls out in anger at seeing his friend and master about to be killed, calling on the Dark Side in rage and summoning the Mother Fyrnock, and much larger beast takes on the Inquisitor and the two Jedi board the Phantom and flee, taking out the Imperial shuttle the Inquisitor and his forces arrived aboard.
Back aboard the Ghost, Hera reveals that Tseebo gave them some information, and Sabine gives Ezra a picture of him with his parents she'd retrieved from a data stick she'd found at their home in the previous episode.

High Points : The absolute highpoint for me in this episode is the undocking of the Phantom from the Ghost while in Hyperspace, the first time we've seen this, and watching the transition as the smaller ship is ripped from Hyperspace as it leaves it's mothership is amazing. The massive deceleration as it drops from Hyperspace, with a rainbow of colours and the streaks of light as it drops back into realspace, makes the maneuver feel risky and dangerous, while being visually impressive.

And while the combat against the Tie Fighters at the beginning is done excellently, the action highpoint of the episode is definitely the fight between Kanan and the Inquisitor, showing exactly how outclasses Kanan is. He's amazingly powerful against conventional opponents, but this fight clearly displays that while he may be forced into the role of a Jedi Master to Ezra, his own training is far from complete and against a fully trained force user, he is no real threat.
The fight culminates in Ezra's call to the Dark Side in rage at seeing his friend and master defeated, his fear of capture and death at the hands of the Empire, and a scene which is a more believable step towards the Dark Side than any we've seen before. Ezra acting in anger to defeat his friend, to protect himself, not in cowardice or desire for power, but in the fear of a child losing his new family while still carrying the emotional wounds of losing his original family.

I must also mention the reuse of the Fyrnocks and the base they call their home, the Rebels returning to a place they know to be dangerous as they believe it will be as great a threat to their enemy as to them. A lovely piece of continuity in a series only 9 episodes old, tying the whole series together.

Low Points : The only downpoint of this episode is so weak I can justify it and turn it into a positive, as I disliked Ezra blaming Tseebo for not protecting Ezra's parents against the Empire. What could Tseebo a single Rodian have done against the massed forces of the Empire, Ezra is totally unfair towards the Rodian. However, that's exactly the point, Ezra is a child lashing out at anyone to blame, and partially blaming himself for the loss of his parents, and the scene I disliked Ezra's behaviour in, leads to his later fear and anger so critical in him calling out to the dark side.
So, even the one part of the episode I didn't like, is essential and important to the plot.

So what do you really think ? : I adore this episode, it not only draws some of the random episodes before it into part of an overarching plot, but lays down plot elements of it's own with the start of Ezra's struggle with the Dark Side, and the beginning of his speciality of linking with animals and beasts through the force which will prove so important throughout the series.
This really feels like Rebels has already found it's footing and is getting on with the business of telling an epic story in the Star Wars universe.

Final Words : My memories of this episode were vague before I watched it, but I absolutely see how important it is in the arc of the series, with not only the start of Ezra's journey as a Jedi, but in Kanan's journey as a Jedi Master, learning how little he really knows, and providing the impetus for him to learn more, so he can teach Ezra more successfully.