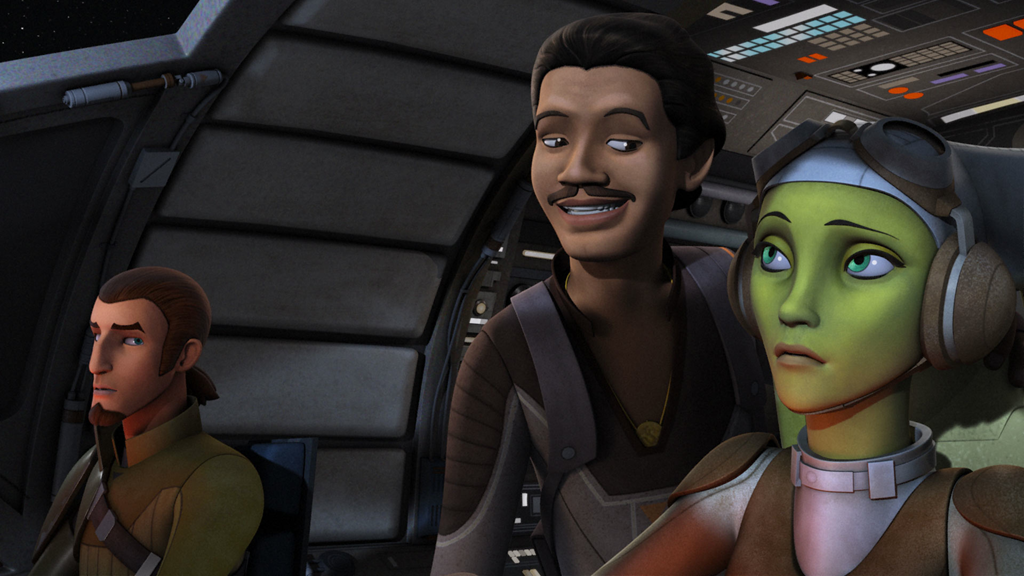 What is it ? : Zeb is playing Sabacc and has a hand that impresses Kanan, but they're out of money, so add Chopper to the pot, but it turns out that they're playing Lando Calrissian, and he has a hand called an "Idiot's Array" and he wins their money and Chopper.
They come to an agreement to get Chopper back that they'll help him smuggle some mining equipment onto Lothal, and Lando begins to charm the ladies aboard the Ghost, complementing Sabines art, and charming Hera who is already annoyed at Zeb and Kanan for losing Chopper.
He takes them to rendezvous with a Gozanti class cruiser, where they meet Azmorigan, who Lando trades Hera as part of a deal for a crate they take aboard the Ghost. Hera later knocks Azmorigan out, and escapes aboard an Escape Pod, being taken aboard the Ghost again. She demands to know what they've taken aboard, and Lando reveals it to be a Puffer Pig, which puffs up when it's scared. Zeb causes it to puff up once, and as Ezra attempts to climb over it, it puffs up even more, knocking Zeb into the controls as they attempt to slip past the Imperial Blockade of Lothal. He impacts with the controls, and shuts down the sensor masking signal, alerting the Empire.
They fight the Tie Fighters sent after them with Kanan at the controls, as Hera is stuck behind the Puffer Pug blockage in the central corridor of the Ghost, and they get to Lando's farm where he intends to use the Pig's sensitive sense of smell to locate mineral deposits, as normal sensing devices have been made illegal by the Empire who want all of the planets mineral riches for themselves.
However, Azmorigan is waiting for them to claim his unpaid for pig, and Hera and the Ghost as compensation, and a fight breaks out between the crew of the Ghost and Azmorigans hired thugs, the Rebels triumph, and discover in the aftermath that Lando cannot pay them what they are due, but as they leave they discover that Chopper used the distraction of the battle to steal a container of fuel, so they have at least profited from their encounter with Lando.

High Points : The episode is amusing and light, with Billy Dee Williams providing all of the charm that Lando has always had. And while Zeb, Kanan and Ezra don't see how Lando could charm the girls, it's easy to see why the smooth talking gambler might impress Hera and Sabine. Let's be honest here, Lando is the main draw of this episode, and he doesn't disappoint.

Low Points : We're back to the characters making stupid decisions, gambling away a member of the crew, squabbling and acting unprofessionally leads to the ship being detected by the Imperials. While it's mildly amusing, I find it annoying to see them continually making mistakes which put their lives in danger.
Due to all of the times he's done it, I find Zeb actually unlikable at this point in the series. He's supposed to be a brave warrior, but plays the idiot of the episodes title too easily.

So what do you really think ? : This episode was well enough done, but it's a light piece of fluff and feels like filler. The only movement in the main plot at all, is the revelation that Ezra's lightsaber doubles as a stun blaster as well as its main function. It's not a total mess of an episode like many of The Clone Wars series, but I did just want it to be over so I can move onto more important episodes.

Final Words : The writers must have known that this wasn't their finest hour, as even though the end sets up a return for Lando, he never does. Oh well, onto better things.