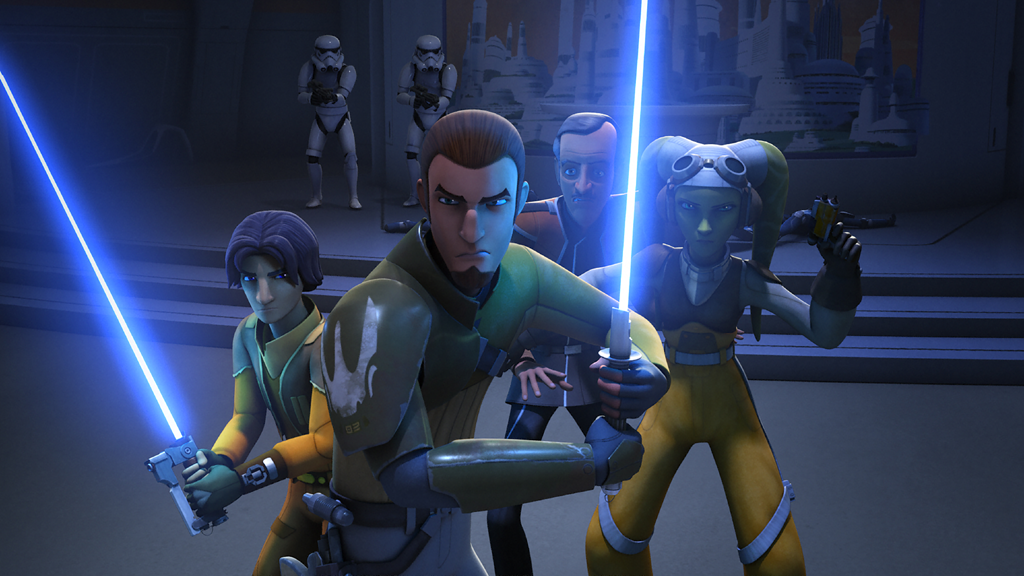 What is it ? : Kanan is training Ezra to deflect blaster bolts, with Chopper, Sabine and Zeb all shooting at him, which he has mastered but is having problems concentrating enough to reflect them accurately at a target (a Stormtrooper helmet on a rock). Asking him which he's having problems concentrating, Ezra tells him he doesn't want to miss the latest message by Senator Trayvis, the voice of the rebellion.
He scolds him for his distraction and impatience, but when they resume, Ezra falls into a trance, successfully deflecting all the blaster bolts fired at him, but seeing a vision of the Rebels fighting for their lives while rescuing Senator Trayvis.
When they head aboard the Ghost, Hera plays them Trayvis's latest transmission, and they decode a hidden message about the old Republic Senate building on Lothal.
Ezra heads into town to meet up with Zare Leonis, one of the cadets he trained with, who reveals that the Empire has stepped up operations around the Old Senate building, and Ezra figures out that they are trying to capture Trayvis.
Escaping from an Imperial patrol he informs the other Rebels, who recognise that the rescue will be a trap but decide that Trayvis is worth the risk.
They successfully get Trayvis from the Senate building, but are chased by Agent Kallus and Stormtroopers as they flee through the sewers, and Trayvis eventually reveals he is a traitor, meeting with Rebel cells to help identify them for Imperial Intelligence.
However, Hera had given him a deactivated weapon during the breakout, having spotted signs of his betrayal, and they knock him unconscious and flee, feeling like their Rebel cell is very much alone once again against the might of the Empire.

High Points : A solid episode with some character development, with not only Kallus and Trayvis making return appearances, but also Zare Leonis.

Ezra continues to get trained early in the episode, making him perhaps the character we see get the most Jedi training of any in the Star Wars Universe. His powers are emerging, but they are all being learnt and earned by his character.

I really enjoyed Choppers part in their plan, with the Stormtroopers ignoring him because he's just a droid, but for once he's really trying to help.

Finally, Ezra is beginning to realise that his parents were heroes. He originally blamed them for getting involved with the Rebellion and caring about it more than him, he is now realising that in part they were doing it for him. Wanting their son to be brought up free from Imperial rule and trying to help others, the way he does now. The slow revelations that his parents were the original voices of the Rebellion, and that they were important to many people as a voice of hope has totally changed his opinion of his parents.

Low Points : Trayvis' betrayal in the episode seemed rather poorly done compared to the way he reveals he normally operates, attempting to capture Hera and Ezra, rather than going back to their base and revealing it's location to the Empire. He simply pulls a gun on them as they flee through the sewers, revealing the way he operates and destroying his future usefulness to the Empire. For an intelligently put together plan, he totally ruins it.
I definitely would have prefered to see him leading the Empire back to the Ghost, and perhaps sabotaging it, so the Rebels had problems fleeing. His normal method of locating the base of operations for Rebels cells wouldn't work with the heroes since they use a ship, but just blurting out the entire plan in a sewer tunnel seemed clumsy.

So what do you really think ? : Yet another enjoyable Rebels episode, the season seems to be shaping up to the heroes wanting to be part of a larger Rebellion, and realising they need not only logistical support, but the emotional support of being part of something bigger than themselves.

Final Words : Well, we're only a couple of episodes from the end of the first season of Rebels, and we haven't had a bad episode yet, here's hoping we won't.