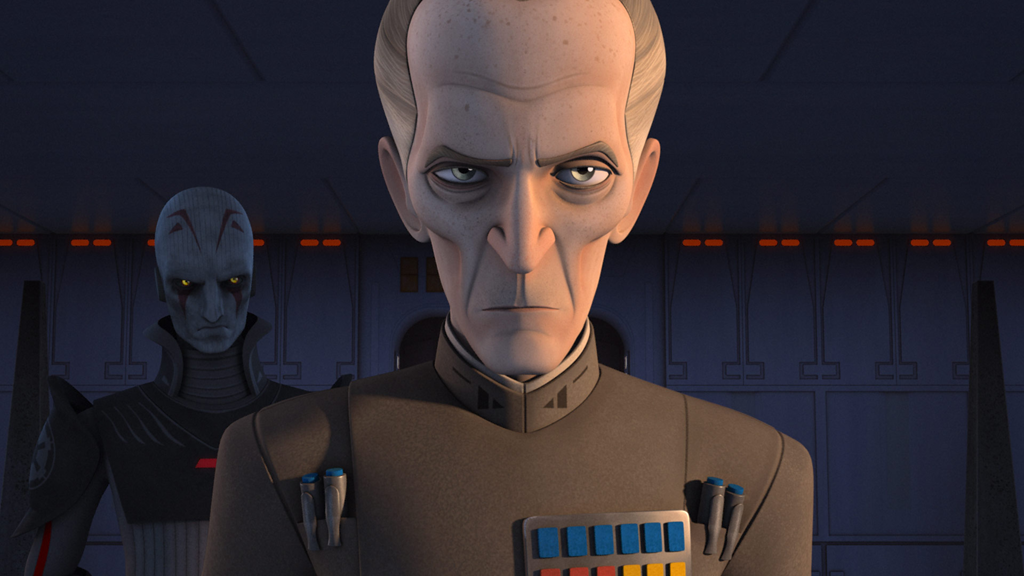 What is it ? : A Star Destroyer slowly glides into position over the capital city of Lothal, and a Sentinel Class Shuttle with a Tie Fighter escort descends to the Imperial Complex. The Imperial Forces await in the hangar at attention, and Grand Moff Tarkin emerges, to the Imperial March.
The Grand Inquisitor, Agent Kallus and the Minister await him, and he proceeds to scold them for their failure to deal with the Rebel problem on Lothal, revealing he is here to deal with the problem.
Meanwhile, the Rebels are being chased by Commandant Aresko and Taskmaster Grint as they flee from speeder bikes through the streets of Jalath. They escape, by stunning the speeder bike riders, and they get back to the Ghost in time to watch the latest transmission by Senator Trayvis. He personally puts out a bounty on the team, claiming they've distorted his message of peace, and that all he wants is to make the Empire better.
Kanan comes up with a plan that they can become a new voice of the Rebellion, by planting a spike in an Imperial transmitter they'll be able to send their message of truth and hope to a number of local systems. So they head off to scope out a transmission tower and come up with a plan to break into it.
Back with Tarkin, he calls for Grint and Aresko, to get the details of the Rebels latest escape, and then has them put to death, saying failure will no longer be tolerated. He then is shown footage of the Rebels being spotted near the transmission station, and he prepares to lay a trap for them.
The Rebels attack the station, and successfully breach it, and Chopper plants the spike into the systems to allow them to broadcast through it. But before they can finish, Tarkin closes his trap, and they must improvise. While Kanan delays the forces at the base of the tower, Hera rescues the others from the top, and Kanan fights the Inquisitor once again, however isn't so easily defeated as last time, but is still defeated and captured.
The Rebels start sending their message out through the tower, as Tarkin arrives to bring the captured Kanan back for interrogation, but their transmission only just manages to get out before Tarkin orders the towers destruction to stop them.

High Points : Wow, that arrival. To the full Imperial March, and a Star Destroyer taking up position hovering over Lothal, very reminiscent of Vaders arrival at the Death Star in Return of the Jedi, Tarkin arrives in the series. And he does not disappoint, verbally demolishing the Inquisitor, and the Minister, although Kallus does seem to give good account of himself. The scene is amazing and I rewatched it 3 times before getting on with the episode, the music is perfect, it looks great and the dialog is sharp. Wow.

And Tarkin continues to impress with the executions of Grint and Aresko, these two lower ranked Imperial officers have been the comedy villains throughout the season so far. With their bumbling attempts to deal with the Rebels weak and ineffectual. But the series seems to be saying clearly, the time that the heroes deal with the Empire with such ease is over, they're going to be challenged more from now on, and things just got a bit darker.

Low Points : My one area of disappointment is that Tarkin's discovery of the Rebels future plans does come about very much by luck. They're spotted scoping out the communications tower, so he plans to capture them there. But if Kallus or the Inquisitor had seen the same footage, they'd have done much of the same thing, so they're no skill in what he's doing, which does weaken him slightly as a villain.

So what do you really think ? : This episode was amazing, from the arrival of Tarkin to the capture of Kanan, we get a rematch between Kanan and the Inquisitor, a speeder bike chase through the streets of a town, and the continuation and possible ending of the Trayvis storyline, not to mention the grisly execution of some long running villains. It's all great stuff, action packed and moving the plot forwards for the series in a very meaningful way. Possibly the best episode so far.

Final Words : Well, Kanan is captured, so we've got his rescue to look forward to. But also how much effect has their broadcast had? We saw it echoing down the streets of Lothal, but is this going to lead to greater support for the Rebels among the population, or has the broadcast led to interest from the greater body of the Rebellion outside the Lothal system? I can't wait to find out.